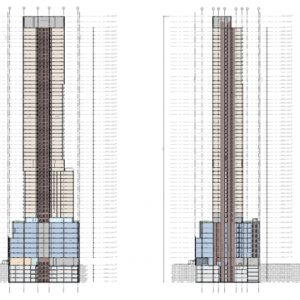 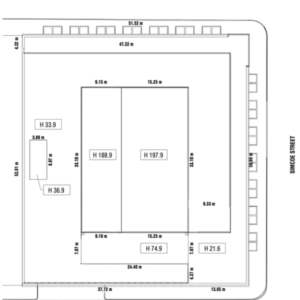 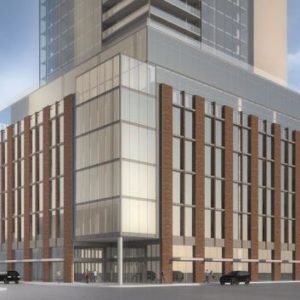 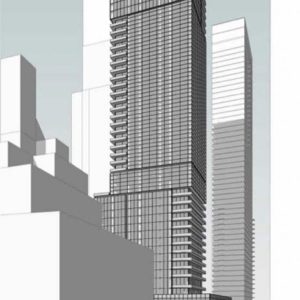 100 Simcoe Condos proposal features a design by Toronto’s Diamond Schmitt Architects. A total of 524 units are proposed, along with 17,171 m² of office space—housed within the 9-storey podium building—and 785 m² of street-level retail space. A 4-storey parking underground garage is also planned, accessible from Pearl Street.

In an attempt to reflect the warehouse typology that characterizes the area, the project’s base building features brick accents along the first 5.5 storeys, meeting the scale of the existing office building and the surrounding streetwall. Meanwhile, the 59-storey tower would rise to a height of 188.9 metres, with the mechanical penthouse topping out at 197.9 metres.

The site plan, showing building heights, image retrieved via submission to the City of Toronto

100 Simcoe Condos Proposed to replace the surface parking lot immediately west of the existing above-ground garage, the 217 Adelaide tower (which is now before the OMB following rejection from the City) would be built to the lot line (or close to it) of the narrow site. For a proposal on that site to go ahead, the tower on the 100 Simcoe site would likely need to be built closer to the east lot line, thereby accommodating the 25-metre tower separation distance identified in the City’s Tall Building Guidelines. Either way, the City does not see 217 Adelaide West as a tall building development site, owing to the narrowness of the lot.

100 Simcoe Condos has a Near Perfect Walk Score of 100 out of 100. The Transit Score 100 out of 100. This location is in the Bay Street Corridor neighborhood in Toronto. Nearby parks include Simcoe Park, St. Patrick’s Square and Grange Park Toronto.