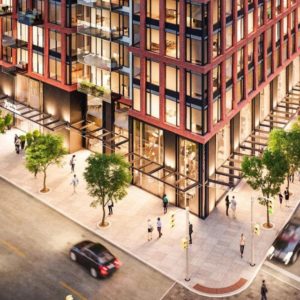 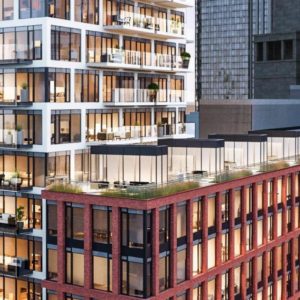 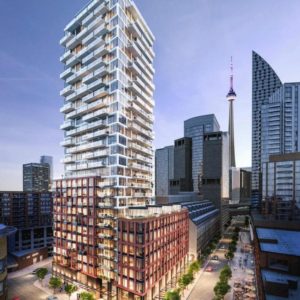 Developed by Harhay Developments and Carttera Private Equities. The Project Will included condos units and Retail. Purposed to be completed in Unknown.

75 Esplanade Condos rendering above presents a 29-storey tower rising from a red brick-clad base with an 11-storey volume fronting Church and a 7-storey volume fronting The Esplanade, we have learned from the developer that the proposal has since been scaled back to a height of 29 storeys to better fit the urban fabric of the surrounding St. Lawrence neighbourhood. Podium heights reference adjacent buildings, with frontage on Church Street mirroring the height of the adjacent 55 The Esplanade, an 8-storey TCHC building atop a 5-storey parking garage, constructed in 1981. Frontage on The Esplanade will reach a similar height as the terraced Novotel hotel to the west at 45 The Esplanade.

Rendering of 75 on The Esplanade, image courtesy of Harhay/Carttera

The new rendering also sheds light on the details of the tower itself, which will feature an envelope of offset frames which evoke the image of the stacked brickwork used on the exterior of many buildings in the surrounding area. Balconies are incorporated in an irregular arrangement that adds a dynamic quality to the exterior.

75 Esplanade Conddos site is positioned between Front Street & Church Street,  The Project has a 350 Units, and Total 34 Storeys. the location will step to the Mall, school,  Major bank and retail shops, supermarket and Park is near by as well.Highway is close by as well.

75 Esplanade Condos  has a Near Perfect Walk Score 99 out of 100. The Prefect Transit Score 100 of 100, This location is in the Waterfront Communities-The Island neighbourhood in Toronto. Nearby parks include Berczy Park, Sculpture Gardens and St. James Park.