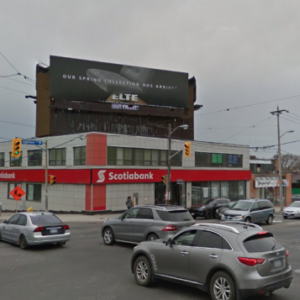 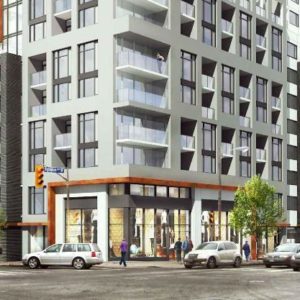 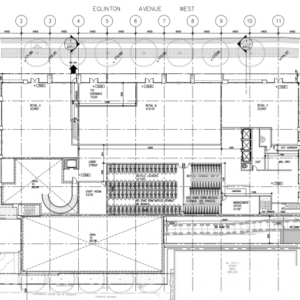 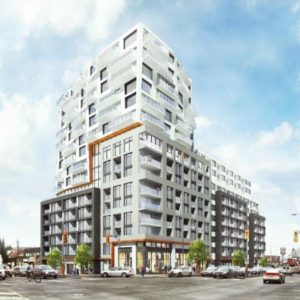 859 Eglinton Avenue West Condoss Featuring 253 residential units, the project includes a mix of 46 one-bedroom, 111 one-bedroom + den, 42 two-bedroom, 28 two-bedroom + den, and 26 three-bedroom suites. Along Eglinton Avenue, the plan includes 1,020 m² of street-level retail, replacing some of the site’s previous commercial uses. West of Bathurst, the project also includes a potential secondary entrance for the Forest Hill station on the new Crosstown LRT line, which was negotiated as part of the previous proposal.

With the corner property now part of the site, a 16-storey height peak is being planned along the east frontage, meeting the intersection with a high-rise form. Meanwhile, the west end of the site maintains the terraced 11-storey height proposed in 2011. Although that project featured a maximum height of 11 storeys—and only 133 units—the smaller site made for a Floor Space Index (FSI) of 7.63, which is slightly higher than the 7.23 FSI now proposed.

While the 16-storey height peak is likely to be a highly conspicuous presence in the neighbourhood, the project’s massing and architectural expression attempt to mitigate the apparent bulk of the structure. While darker brick frontages reference the area’s existing streetwall, the lighter volumes above step back from the street, with the massing and colouration ostensibly minimizing the visual impact of new density.

The project will also include a landscaping plan by NAK Design Group. As this stretch of Eglinton is designated as an ‘Avenue’ in Toronto’s Official Plan, the street-level retail will be met by widened sidewalks and an improved public realm, with new plantings planned along both Eglinton and Bathurst.

With construction for the Crosstown LRT now well underway, the project would join a growing corridor, with a large volume of high- and mid-rise projects planned across Eglinton. Though the Eglinton-Bathurst area has yet to become a particularly active development hub, nearby projects like the under-construction The Hill Condos—located a few blocks west of Bathurst—are now beginning to bring greater density to the neighbourhood, ahead of the upcoming underground rapid transit line.

859 Eglinton Avenue West Condos  has a Walk Score of 92 out of 100. Transit score of 80 out of 100.This location is in the Forest Hill South neighborhood in Toronto. Nearby parks include Castlefield Parkette, Nicol MacNicol Parkette and Ben Nobleman Park.