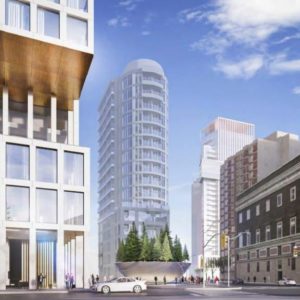 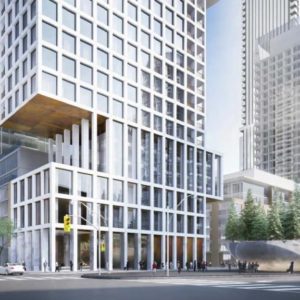 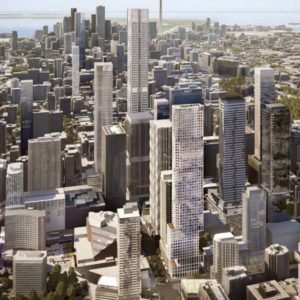 878 Yonge Condos is a new per-construction Condos project located at 878 Yonge Street In Toronto.The Major Intersection are Yonge Street and Bloor Street East. The Project develpled By Cityzen Development.878Yonge Condos is 59-storey condominium with 194 Units, Designed by the highly regarded Bruce Kuwabara of KPMB Architects, the 59-storey structure with a marble and white concrete-clad exoskeleton is meant as an architectural gateway to the Bloor-Yorkville area from the north.

1 Scollard is proposed as a slender tower of approximately 15 metres (50 feet) north-south by about 38 metres (124 feet) east-west, rising through shifted volumes to 229.4 metres (752 feet). The building would contain 194 residential suites and 189 spaces in a fully automated underground garage.

A simple grid is continuous across the entire exterior of the building, with punched windows facing out in all directions. Soffits below the overhangs and the solid walls are proposed to have the appearance of burnished metal. At ground level, a loggia along the Scollard Street frontage and a fully glazed lobby allow penetration into the site, and views from the Yonge Street sidewalk through to Scollard Street and the Frank Stollery Parkette to the north.

878 Yonge Condos has a Walk Score of 100 out of 100. Transit Score if 95 out of 100.This location is in the Rosedale-Moore Park neighborhood in Toronto. Nearby parks include Harold Town Park, Asquith Green and Jesse Ketchum Park.