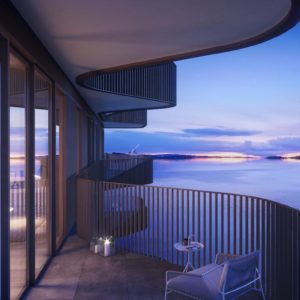 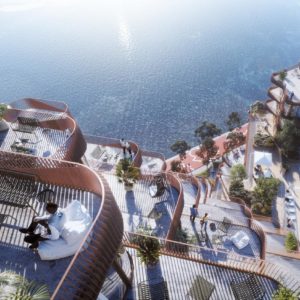 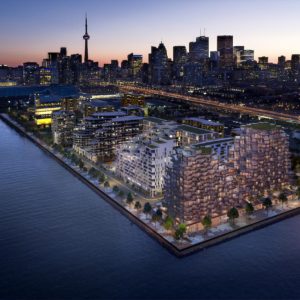 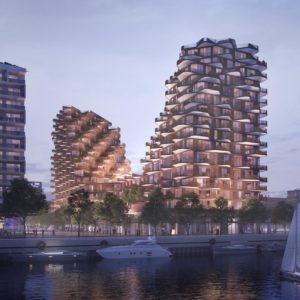 AQUABELLA at Bayside Condos with a series of 64m² terraces topping the building, the massing strategy allows each residence an unobstructed view of the water, while the building’s sloping and somewhat irregular form avoids the impact of a monolithic presence on the waterfront. For the architects, the goal was to create an intimate community ambiance within a dense urban environment. Particularly inspired by “the cottages of the Toronto islands,” Opdal describes the outdoor spaces as a conduit for socialization.

A closer look at the stacked terrace from the 7th floor amenity area, image courtesy of Tridel/Hines

For 3XN, the design attempts to recreate the intimate urban ecology of some of the city’s best residential neighbourhoods. Maintaining an architectural typology of “human-scale volumes” across the body of the building, the terraces create comfortable environments with “texture, colour, depth and variety” Herforth Nielsen explains. Individualized landscaping will also allow residents to create more private spaces, while a 7th floor amenity terrace with pool (seen above) will provide a fully communal space.

Looking northeast, the building will look out over Aitken Place park to the west, image courtesy of Tridel/Hines

The massing strategy also works to preserve sunlight to Aitken Place Park, which will neighbour the development to the west. The L-shaped building—which extends north along its western frontage and narrowing out towards the east—is set to feature “approximately 200 units,” Opdal tells us, though finalized details are still to come.

Once complete, the 13 acre Bayside neighbourhood will feature six residential and two office buildings, and will bring approximately 1,800 new homes to the waterfront. Developed in line with Waterfront Toronto’s vision, the $1.1 billion master-planned development is reshaping a significant part of the city’s east lakefront, with the mixed-use community a far cry from the post-industrial landscape that once dominated much of the area. The proposal has just been seen by Waterfront Toronto’s Design Review Panel for the first time, and still has to pass through the City of Toronto’s planning application process.

AQUABELLA at Bayside Condos has a Near Perfect Walk Score 83 out of 100. The Prefect Transit Score 92 of 100, This location is in the Waterfront Communities-The Island neighborhood in Toronto. Nearby parks include Sculpture Gardens, St. James Park and Berczy Park.