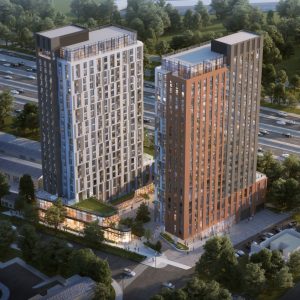 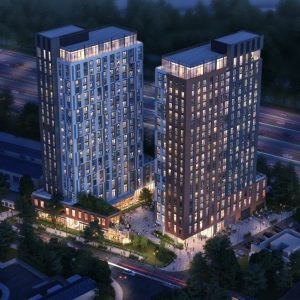 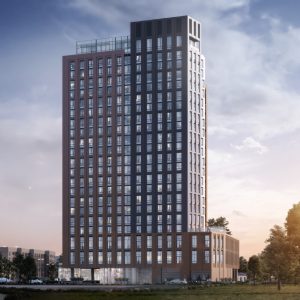 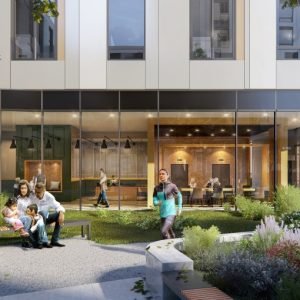 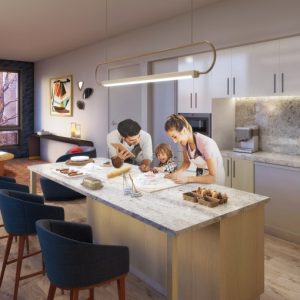 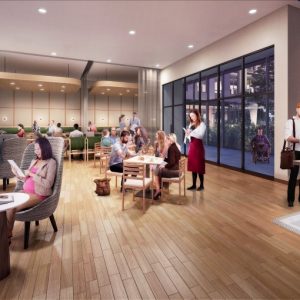 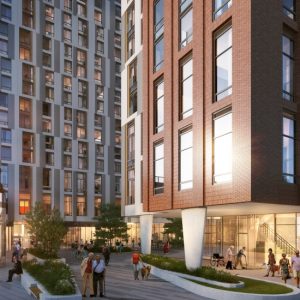 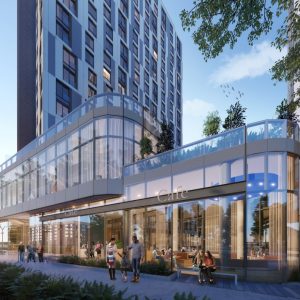 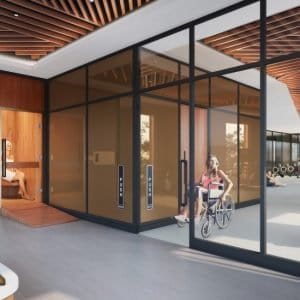 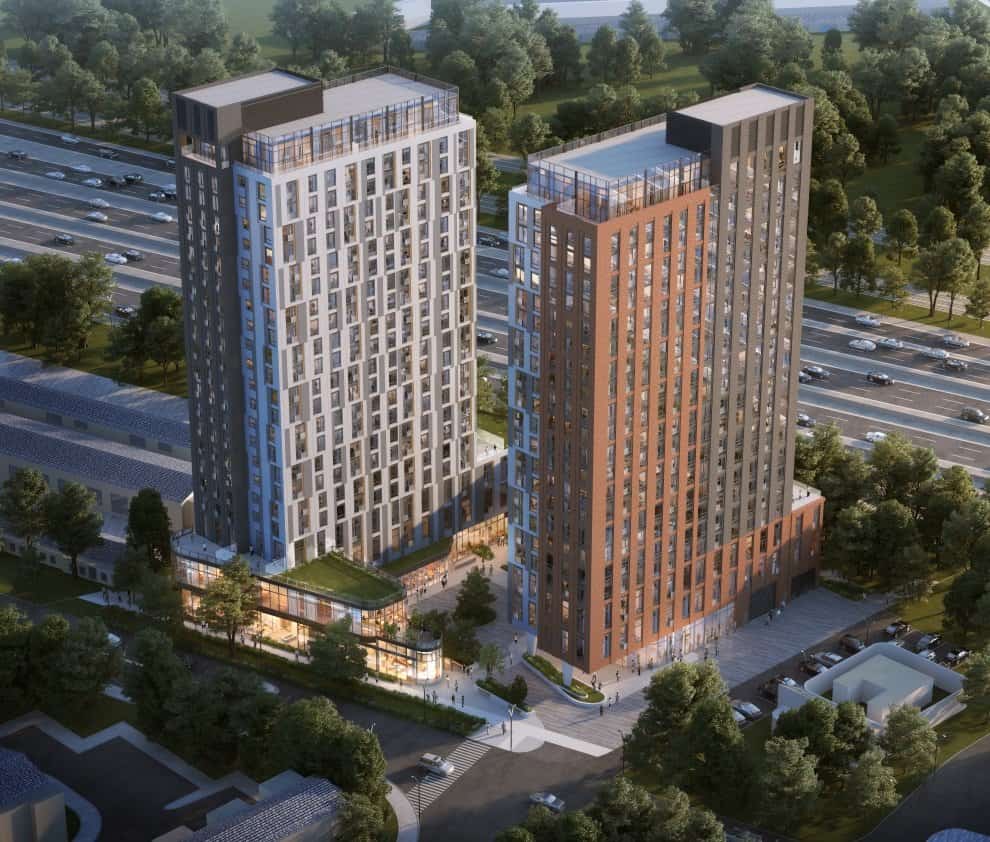 Axess Condos is a new, one-of-a-kind development in Pickering. With spacious suites, and luxurious amenities, Axess is a pre-construction project to keep an eye on.

A mixed-used building developed by Liberty Hamlet, this project will rise out of the property at 1525 Pickering Parkway. Just over five minutes by foot from Pickering Town Centre, Axess will have a singularly convenient location within Pickering.

The world’s first fully-accessible condominium, Axess will provide unparalleled accommodation to people with mobility and cognitive disabilities. Every suite will be outfitted with additional amenities to account for this, and provide a higher standard of living for people with needs not usually met by condominiums. Room sizes will be larger, as will hallways, and since it is located so close to a mall and transportation hub, residents will have easy commutes and transit options.

This development is located in a highly convenient area of Pickering. Right down the street from Pickering Town Centre, a shopping mall with over 200 retail stores, including a Saks Fifth Avenue, as well as a Cineplex Cinemas, Winners & Homesense, and many more.

With other staple big box stores a short drive away like Home Depot, Loblaws, Canadian Tire and Walmart, residents of Axess will find that everyday chores and errands a simple, convenient affair.

The area is also peppered with many parks and green spaces. Diana Princess of Wales Park, and the Esplanade Park are both just a few minutes north, with plenty of green space, pathways, a basketball court, a ball-hockey court, a skateboard park and community gardens.

Axess Condos will be a two-tower building, connected by a 3-storey podium at ground level. The two towers will be 22- and 24-storeys tall and contain a combined 336 units. These units will be divided into one-bedrooms, two bedrooms, three bedrooms, and have an average size of 950 square feet in the south tower and 770 square feet in the north tower.

Due to Axess’s commitment to accessibility, the building will have 6-feet-wide hallways, wider parking spaces, braille/tactile markings and BlindSquare Beacons, as well as visual fire alarms for the hearing impaired. In addition, Axess pledges to have levered door handles, and 36-inch-wide doorways, as well as closets designed in easy-access locations throughout the units, with simple slide doors to maximize usage.

Bathrooms will be designed larger than usual, and contain walk-in showers, with wheelchair turning radius. Also included will be sinks with knee clearance.

Further, kitchens will include a side-opening over, cooktops with knee clearance, and dishwasher drawers.

Along with all these amenities, Axess is looking to set a new standard for amenities that accommodate people with disabilities. This includes ensuring a robust emergency back-up power system for power failures.

But that’s not all, Axess is also providing personal support and respite workers, as well as a day program for people with autism, and nearby another facility will be providing service animals. The ground floor will also contain a medical office and pharmacy, as well as a rush hour shuttle bus service to the nearby GO station.

On top of all of these game-changing amenities, Axess will also have a host of other amenity space, including a restaurant on the top floor of one of the towers, offering patrons incredible views of the surrounding region.

Being in such a centralized location makes Axess live up to it’s name. Only 10 minutes by foot from Pickering GO Station, and with a planned shuttle service directly from the building, commuters will find it easy to reach the downtown core by way of the GO Train commuter rails in short order.

Also nearby is the Pickering Parkway Terminal – with five Durham Region bus routes at this station. Axess is also very close by to the Highway 401,  residents of Axess face short, manageable commutes into the city, and with connections to Northbound highways like Highway 12, the 404, and the 400, trips up north to Barrie, the Kawartha Lakes, and the “cottage country” of the Muskokas is easy.

Liberty Hamlets is one-of-a-kind. They pride themselves on seeing real estate from a different perspective, and focus on inclusivity and accessibility in their projects.

Building homes with functionality and mobility in mind, Liberty Hamlets is breaking the mould for what a condominium can be. With this new project, every living unit will be specifically designed to support and accommodate people of any size, age, or disability.

While most condominiums only need to make 15 percent of their units AODA-compliant, Liberty Hamlets figures, why stop there? Why not make these base accessibility features into standards for their projects? Surprisingly, no one has really attempted to do this before. Liberty Hamlets believes they will change the expectations for future GTA condominiums.

CEO Dan Hughes, who’s two parents live with physical disabilities, has served on the Pickering Accessibility Committee, approaches Liberty Hamlets development as an opportunity to increase Toronto real estate’s inclusiveness, and use living spaces to start a conversation about how we accommodate for others.

“That’s why I wanted to start my own company, so we can make it not focused on the money, but to actually make a project focused on the individuals coming in,” said Hughes.

It took over three years to plan Axess, and Hughes says that in the future, Liberty Hamlets will only continue to push these boundaries.

This growth is largely due to the influx of population, which is undergoing a dramatic downtown rejuvenation. Millions have been invested in building a new urban core to the city and surrounding areas, with emphasis on higher density and mater-planned communities with amenities right at the doorsteps to these new condominiums and subdivisions.

With the city’s intention to revitalize the city centre, with the Pickering Town Centre Redevelopment Program, the area surrounding this central location is looking to see a large influx of homes and densification. This makes investment in this area a smart move as the region of Pickering continues to rejuvenate these core neighbourhoods.

The average selling price of pre-construction condos in the City of Pickering for 2019 is $339,600. New listings, for the year thus far, has maintained a price per square foot of $566, while prices continue to grow to 28.1% year-over-year.

Over the next ten years, Pickering’s population is expected to basically double, with an increase of nearly 100,000 residents. As this massive growth  begins, demand for housing will increase and we will likely see a boom in development in the area. Get in on the action now with Axess! 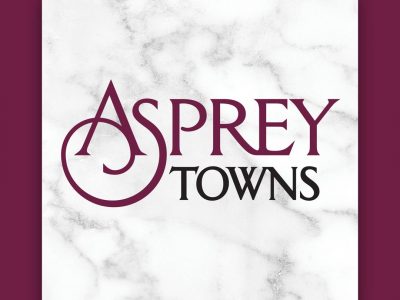 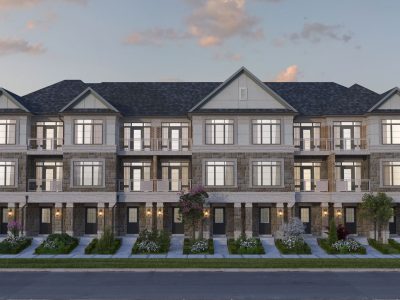 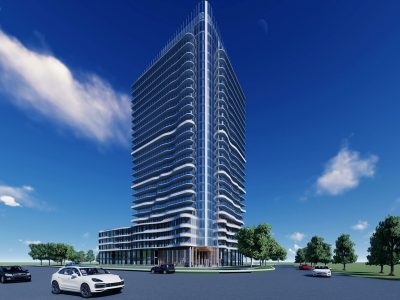 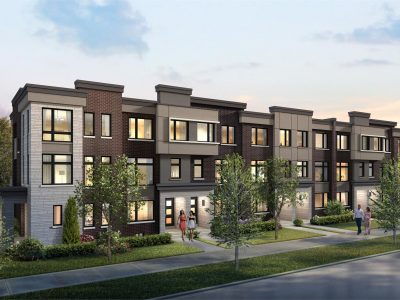 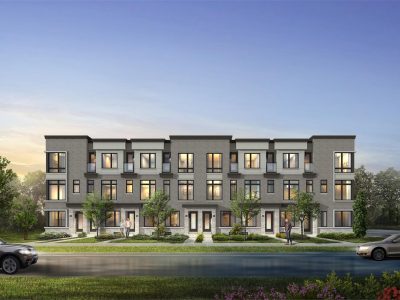 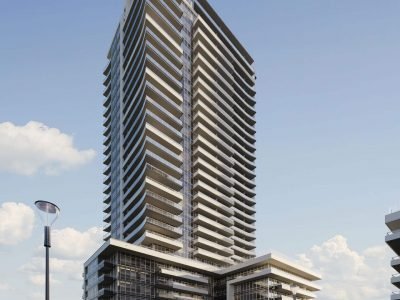 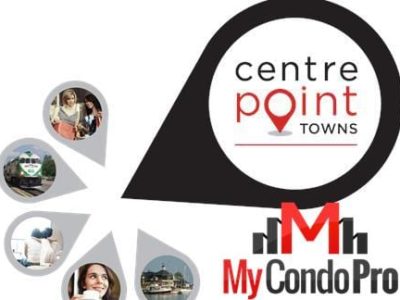