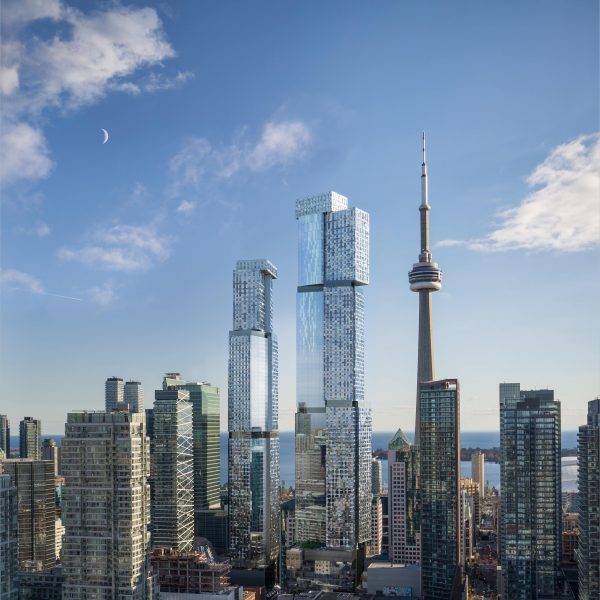 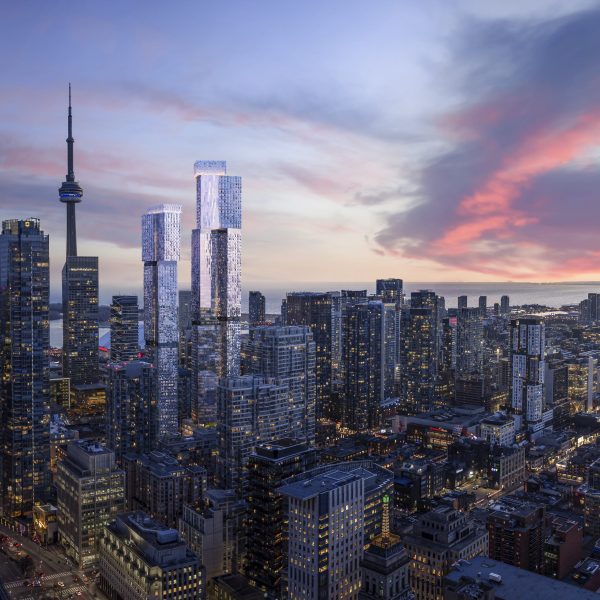 The concept, which is still under development and promising to be unique among other condos in terms of scale as well as design elements. The two 6-story stepped podiums, which relate in scale to their neighboring structures by an 84 story tower with unique but fitting design that fits right into this neighborhood.

Designed by world-renowned architect Frank Gehry, this proposed community will be unlike anything Toronto has ever seen before. Early renderings depict an interesting design with two towers that are 73 and 84 storeys high – making it taller than any other residential structure in Canada!

Gehry’s vision consists of two towers housing a total of 2,034 units. One on either side of Duncan Street where it meets King Street West. Both across the street from Metro Hall, David Pecaut Square, and Roy Thomson Hall.

The west tower qualifies as ‘Supertall’ with a four-level podium of retail and also including a mezzanine. Four levels of office space, especially with the condominium amenities on the podium-top level. Finally, with condo suites in tower floors above. The building will slightly overhang the Princess of Wales Theatre to the west. The east tower’s podium will include three levels of retail (including a mezzanine) and three levels of office space, along with two levels for OCAD University. Like in the west tower, the first two levels will house the amenities—including the podium-top terrace—with the condo suites rising above.

Forma Condos is located on King West, which is known for the entertainment district Toronto, and the Theatre District. It’s a mecca for those who like food, drink and entertainment. With countless restaurants & bars, living  at the Gehry you’re spoiled for choice when it comes to finding the perfect place to eat & drink. And with easy access to public transit, getting around Toronto is a breeze.

When you think of an amazing mixed use community, Projectcore is should be at the top. This luxury development in Toronto enriches its surroundings and also offers each resident something new and exciting. Located in the John and Simcoe cultural corridor, known as the centrepiece of the Entertainment District. The city is rich with culture and life. Lined with luxury stores, clubs for every taste level in Between there’s plenty to do such as visiting Kensington Market or the nearby Entertainment District.

One of the most experienced and respected architects in North America is Frank Gehry. For over 50 years, Frank Gehry has been designing some of the most iconic buildings in the world. His projects include the Guggenheim Museum in Bilbao, Spain, the Walt Disney Concert Hall in Los Angeles, and 8 Spruce Street in New York City. Frank Gehry’s reputation for excellence is second to none, and his involvement with a project is often seen as a sure sign of quality

Gehry is creating a powerful creative synergy is set to transform Toronto’s iconic King Street arts and entertainment district. Architect Frank Gehry have joined forces to unveil a bold new vision for our Cultural Corridor, with the creation of a new public gallery, cultural and educational facilities, residential and business spaces. The inspired vision for Gehry’s Condo will see King Street evolve into a thriving, livable urban community, a great address to come home to and experience the finest in art, culture, design and life that Toronto has to offer.