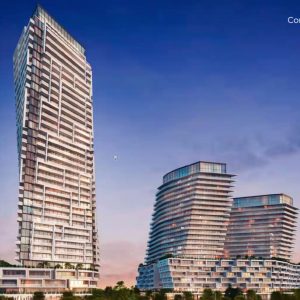 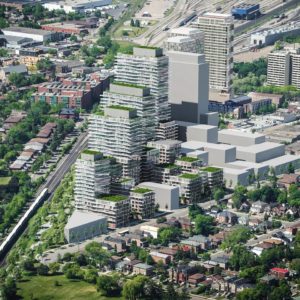 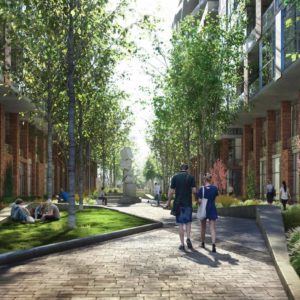 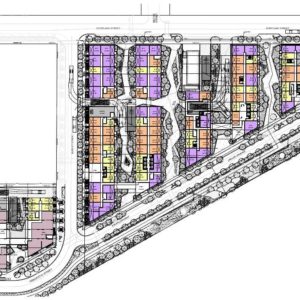 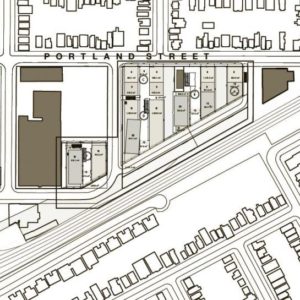 Just southeast of Royal York Road and Evans Avenue in the Etobicoke Neighbourhood of Mimico, the site spans an impressive four blocks. Grand Park Village is looking to be a community within the growing Etobicoke and will include five towers, ranging between 16 to 32 storeys. Each building will have units of various sizes, bedroom counts, and layouts. This development is perfect for a wide-range of buyers looking for residence or investment in Etobicoke. Keep reading to find out why we’re so excited about Grand Park Village. 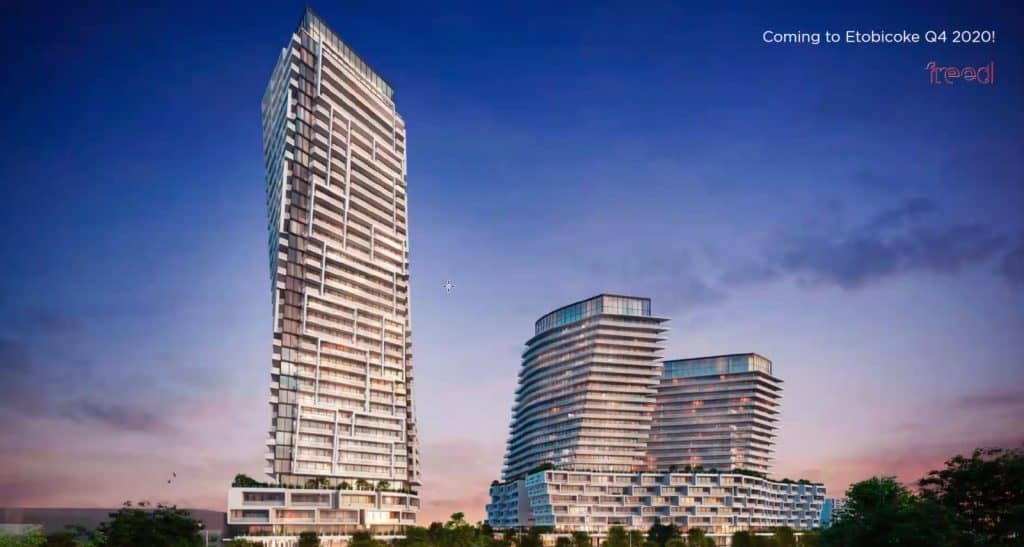 Grand Park Village site is triangular in shape, bounded to the north by Portland Street, and to the southeast by the Lakeshore West Rail Corridor. A private property abuts the eastern boundary while the western boundary will be divided between Audley Street to the north and another abutting building to the south at 8 Newcastle Street, where the assembled properties leap cross Audley. The site is currently home to a collection of one- and two-storey light industrial properties, which would be demolished.

The Site plan and elevation diagrams of the Grand Park Village reveal various views of the buildings’ angular exteriors and slab typologies, with architectsAlliance following a similar design approach as recent projects like Pier 27. The offset upper levels seen on elevation diagrams are reminiscent of the firm’s Karma Condos project currently under construction near Yonge and College.

The western edge sits steps from Mimico GO Station, the proximity of which will be cited as a rationale for the change of land use and the increased densities being sought. While regional rapid transit accessibility is indeed the key to this site’s redevelopment potential, nevertheless the site’s suburban location is recognized by the inclusion of 1,028 parking spaces in the proposal.

Established in 1856, Mimico is a charming residential and retail neighbourhood in the southeast corner of Etobicoke. Named in Urban Toronto’s Development Guide as a neighbourhood to watch, it’s mostly known for its gorgeous waterfront, towering condos, and the lush parklands of the Humber River.

Spend the day exploring Mimico’s gorgeous parks, which descend along the Humber River, and define the picturesque Humber Bay. Enjoy the bike trails and paths with incredible views of Lake Ontario and the Toronto Skyline in the distance. Dog parks, yacht clubs, and lookouts pepper the green spaces all along the lakeshore giving residents unlimited options on a summer day. On weekends, residents can take advantage of the Humber Bay Shores Farmers Market, taking in artisanal foods, pastries, wines, and much more!

Shopping is easy with Sherway Gardens Mall just a seven-minute drive away, and featuring over 200 retailers and restaurants including Hudson’s Bay, Saks Fifth Avenue, and Nordstrom. The mall was renovated in 2017 and continues to be a staple draw for residents of the people of Etobicoke.

Grand Park Village will include five towers, eating heights of 16, 23, 25, and 32 storeys. In total, this ambitious community will house 1,824 residential units.

Gorgeous walkways will intertwine the development, bringing greenery to the complex and providing a natural outdoor respite for residents.

Many units will feature balconies and the project is expected to include green roofs for sustainability.

Though specific amenities have yet to be released, Freed is known for their excellent resident amenities. Register now with MyCondoPro to stay up-to-date with any new releases from the developer!

Etobicoke is well connected to the many roads and highways that make up the GTA’s primary transportation system. A simple grid street layout makes access to Highways easy. Residents will enjoy a 5 minute drive to the Gardiner Expressway, which takes you straight downtown, providing easy paths into the core, and making commutes a breeze.

And if you’d rather not drive, the TTC and GO Transit have a robust presence within Etobicoke, making it a no-brainer for easy commutes into the city as well as travel throughout the GTA. Connect to the TTC Line 2 simply at either Royal York Station or Old Mill, each about a ten minute drive away. Line 2 Bloor-Danforth has it’s western tip ending at Kipling Station near Islington City Centre West in the heart of Etobicoke, and countless bus routes line the many roads and streets heading north and southbound from there.

Maybe one of the most exciting features of Grand Park Village’s location is that it is just a six minute walk away from the Mimico GO Station. Buyers looking to commute into the city won’t find many condos with such a convenient connection to the GO Train, and will enjoy using the system to reach the downtown core of the city in short order. There are currently plans to extend the GO Train system to 15-minute, all-day service, which would increase the convenience of this commuter rail system.

Founded by Peter Freed, this firm has $1 billion in finished buildings across the GTA. Having won many awards already, including BILD’s High Rise Project of the Year Award in 2016, Freed prides itself on being a “design-based” group, bringing in celebrated designers to elevate projects with those personalized finishing touches that make a home stylish, and unique.

A strong believer of the “live, work & play in your neighbourhood” principle, Peter Freed has worked hard to ensure communities are centralized, with amenities, restaurants, and culture all within walking distance. More than just a development firm, Freed sees itself as Canada’s first diversified lifestyle company – building homes that feel like communities.

Etobicoke has long been considered a green, family-oriented area. It’s suburban, and industrial roots have maintained its reputation as a dormitory community for those looking to live just outside the hustle and bustle of the Toronto core. While this remains true, a new influx of other residents is beginning to shift the demographics of the area. Younger residents are increasingly finding the Etobicoke way of life to be very attractive, and are moving into the area in droves. Companies in the tech sector are choosing to build headquarters and offices in the area, retooling old industrial buildings and bringing new energy to older neighbourhoods. These offices and production facilities are bringing new jobs to the area, and enticing young professionals to settle in the area. 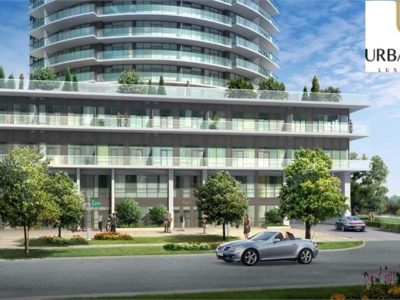 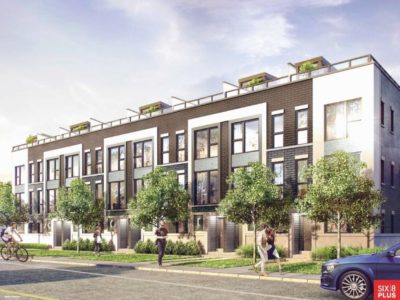 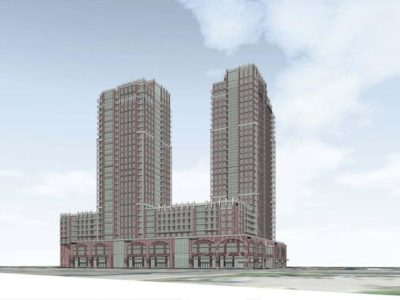 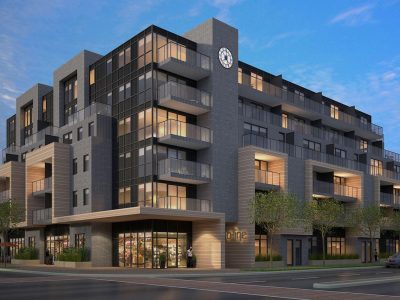 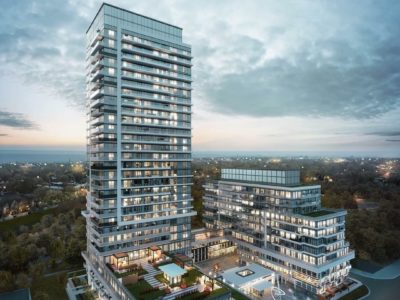 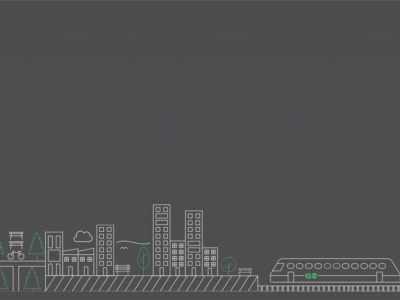