Search Toronto for your perfect home

Toronto is the centre, and largest city within the GTA. Famously made up of six boroughs, Etobicoke in the west, York and North York to the north, Scarborough and East York to the East, and the central district of Toronto itself.

Toronto is central and southern in the GTA and is surrounded by a series of regions that make up the rest of the GTA, with Durham Region to the East, York Region to the North, and Peel and Halton to the West. The city is along the north shore of Lake Ontario and makes up a large segment of what is known as “The Golden Horsehoe”, which curls around the west end of the lake and into the Niagara Region.

Toronto is the biggest city in Canada, with approximately 2.9 million people living within the city bounds, and a total of approximately 6 million in the entire Greater Toronto Area.

Toronto is home to a robust network of highways and roads. Most of the major routes connect and cross largely within the North York borrough, with highways like the 401, the 400, and the 404 which tie together and go their separate ways across the GTA, reaching the eastern region of Durham and beyond to communities like Kingston, and Peterborough, further west with Peel Region and Halton, as well as Hamilton and the rest of Southern Ontario, and also up north to Barrie and the “cottage country” of the Muskoka region. No matter how central within Toronto you live or work, the rest of the province is just a short trip away, with the city sitting right in the middle of the famous Quebec-Windsor Corridor, the most populous area in all of Canada.

Travel throughout the GTA is easy, thanks to the TTC, which runs 4 major subway lines through the city, Line 1 University-Yonge, which famously is shaped much like a U, and Line 2 Bloor-Danforth with connects the various eastern and western communities to the centre of the city. Most stations have connections with streetcar access and bus routes to further refine your trip. Most major lines at some point meet at Union Station, in the southern end of the Entertainment District. From here, travellers, commuters and explorers alike have seemingly unlimited options. The UP Express Train connects Union to Lester B. Pearson International Airport in Mississauga, the GO Transit infrastructure runs commuter rail lines across the entire GTA and beyond, and VIA Rail provides inter- city transit along the Quebec-Windsor Corridor, the most populous region in all of

Toronto is an international centre for business and finance, known the world over for it’s stock exchange and international financial institutions. Generally considered to be the financial capital of Canada, Toronto is home to many of the country’s largest institutions and corporations, as well as home to the country’s largest stock exchange, and seventh largest in the world, the TSX or Toronto Stock Exchange.

The West End is a vibrant economy with countless opportunities for workers. It’s a prime spot for commuters who work further downtown, since trips into work an take less than twenty minutes, even on the subway and streetcars. And as the East End continues to grow, diversify, and densify, so too does it’s economy. Rail connections and commuting make working throughout the GTA easy and simple, but countless jobs are springing up as the area becomes more and more attractive to new families and young professionals, looking to build community ties through new restaurants, services, festivals and community spaces.

Toronto offers a wide choice of education options for new families, with Toronto District School Board making the largest and most well-known, as well as three other school boards that provide english and french education in both Catholic and secular curriculums.

It’s also home to many post-secondary opportunities, and close to some of the GTA’s largest educational institutions, like Ryerson University, Glendon Campus of York University, Victoria University and Centennial College.

The East End is perhaps best known for it’s many beautiful greenspaces and parks. Woodbine Park in particular, is a destination in itself, with volleyball courts, parks, picnic areas, barbecue sites, a boardwalk and so much more. The West end is home to one of Toronto’s most impressive parks – High Park, which sits in the area’s south-west corner, starts at the short of Lake Ontario and pushes an impressive 2 km north to Bloor St. and spans 161 hectares.

Just a few short minutes by ferry are the Toronto Islands, famous for their wide open park spaces, their warm sunny beaches (in the summer, anyway) and their wealth of community events throughout the year.

Toronto has been growing steadily since the 1960s, but now may the most exciting time in recent memory for the city’s Job Market. Prices have continued to rise, but growth has been occurring all across the city.

Some of the most exciting condo projects in the entire GTA are taking right in it’s core. Areas around Fort York, and St. Lawrence Market are seeing a rejuvenation as new developments break ground and try to bring more density and diversity to the core.

The west end has seen a drastic change over the past few decades, enjoying the benefits and pitfalls of gentrification. The built-in dynamism of a strong young demographic keeps the area vibrant throughout, and helps strengthen the demand for

higher density housing options. As such, condos are constantly breaking ground and rising above the idyllic canopied residential streets. Liberty Village has had an explosive rise from the 2000s into the 2010s, and now we see similar developments rising in other places like the massive new project at the old site of Honest Ed’s and Mirvish Village.

Condo prices in the Toronto sit healthily in the high $400K range, and continue to grow by about 10% every year. With all the development, culture, and community within the West End, now is the perfect time to look into a home in this iconic Toronto area. 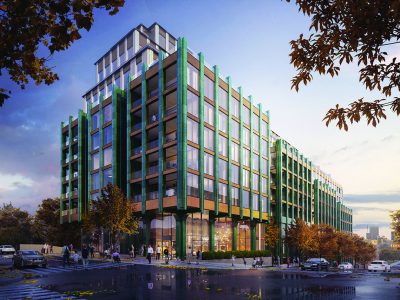