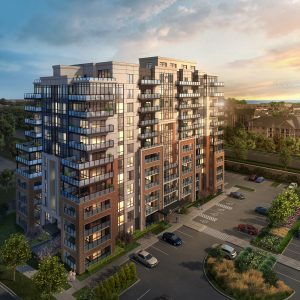 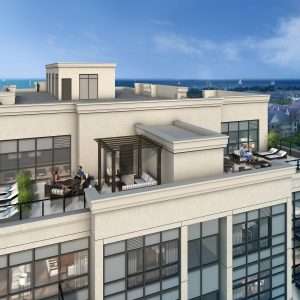 Modo 55 is a new condo and townhouse development currently in pre-construction by Kaitlin Corporation. Coming soon to 55 Clarington Boulevard in Bowmanville.

Kaitlin Corporation, a well-known developer in Southern Ontario, is about to start yet another production on another thrilling condominium project in Bowmanville! Modo 55 Condos is the latest addition to Kaitlin Corporation’s MODO (Modern Downtown) series. Because of its convenient location and sleek finishings and features, this pre-construction tower is already attracting attention. Modo, located in the heart of Bowmanville, would be an ideal option for customers looking for a downtown lifestyle specifically without the hustle and bustle of the core. This project is worth keeping an eye on because it provides a luxurious and relaxed environment.

The evolution of urban downtown life is presented with MODO Condo, a series of dynamic condominium projects. With the newest condo, Mode 55, planned for the modern downtown Bowmanville, especially just 35 minutes east of Toronto. Modo 55 Condo has plenty for all, with 1-bedroom, 2-bedroom, as well as 3-bedroom condominium suites, all of which have dens. 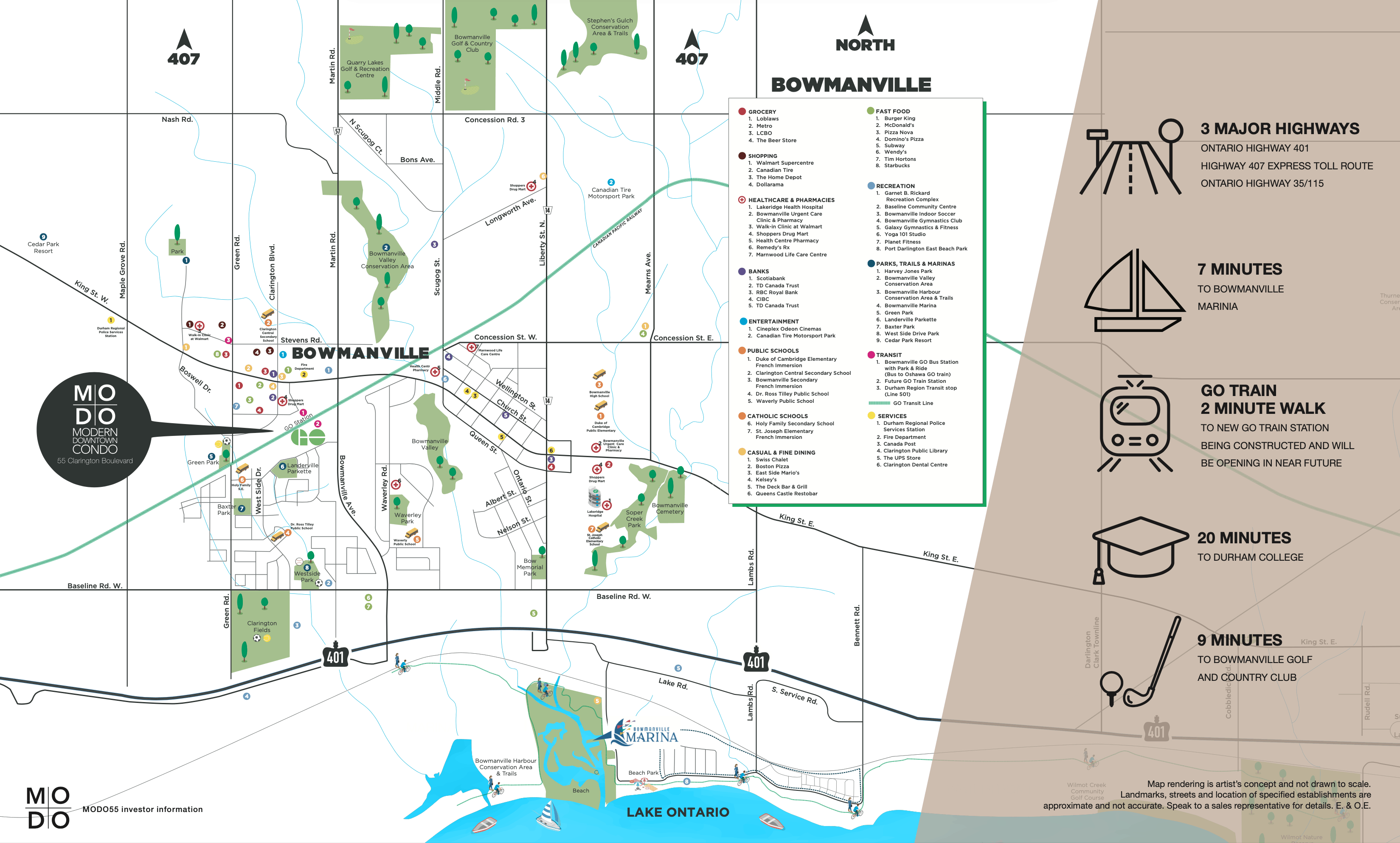 Modo 55 is located in the heart of Bowmanville at 55 Clarington Boulevard due to its network of nature trails and is ideal for hikers and residents looking to reconnect with nature. Residents can reach Bowmanville’s downtown center by taking a quick drive east. Bowmanville is just 35 minutes east of Toronto in terms of commute time, and residents would also have access to about all they may need right from their front door. 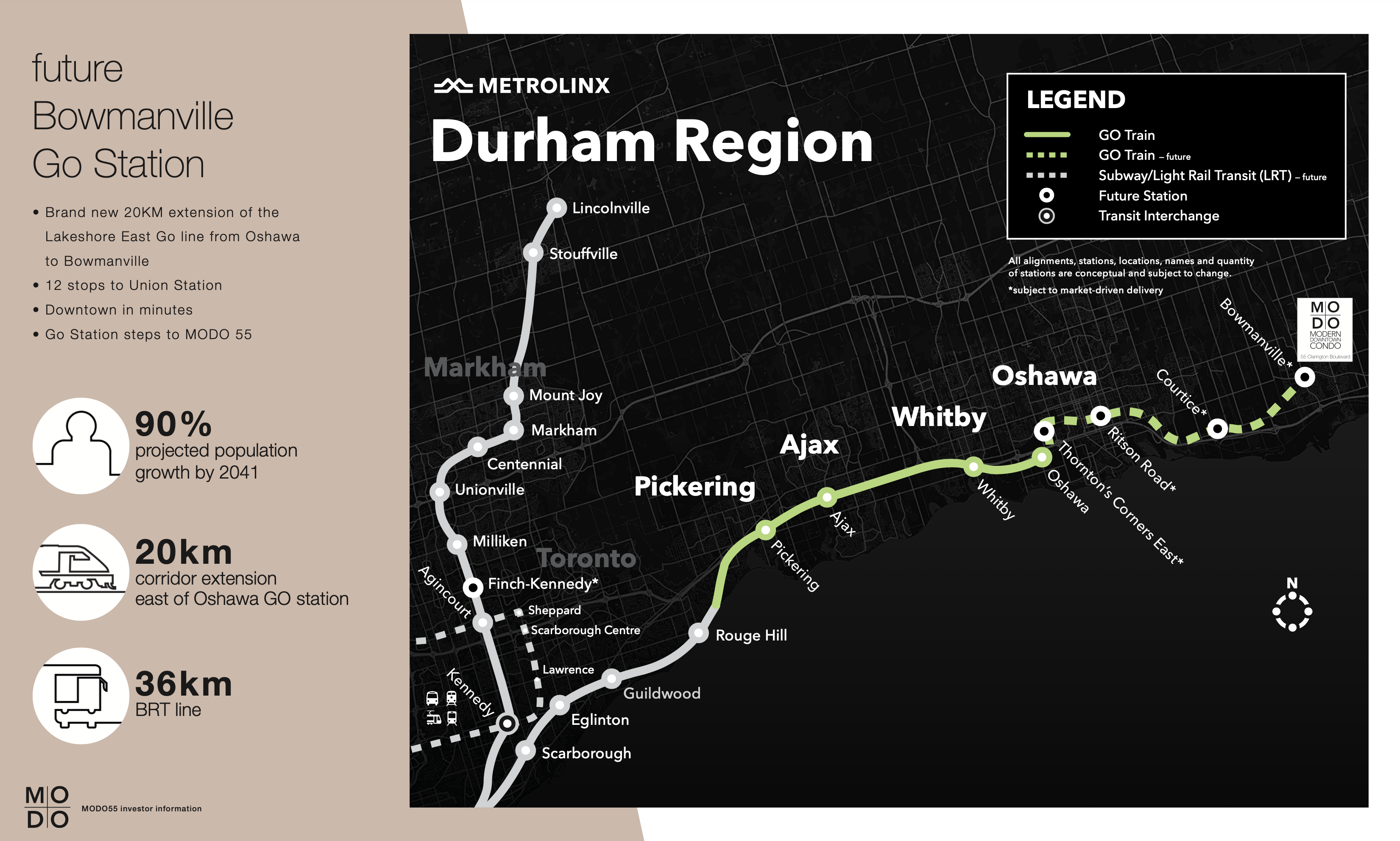 Durham Region is located on the eastern edge of the GTA and is also on the way west to cities like Kingston, Ottawa, and Montreal. Residents of Durham face quick, accessible commutes into the city, and with connections to Northbound highways. This includes Highway 12, the 404, and the 400, trips up north to Barrie, the Kawartha Lakes, as well as the “cottage country” of the Muskokas are convenient.

Public transit in Durham Region is robust and affordable due to to Durham Region Transit. Routes run throughout the region, and connects residents to the many GO Transit Commuter Rail stations in Ajax, Pickering, Whitby, as well as Oshawa. GO Transit provides quick and easy trips into the city of Toronto, especially with lines that end at Union Station right downtown. Residents of Modo 55 will have access to GO Transit stops within 5 minutes walk of their front door, making commutes simple. 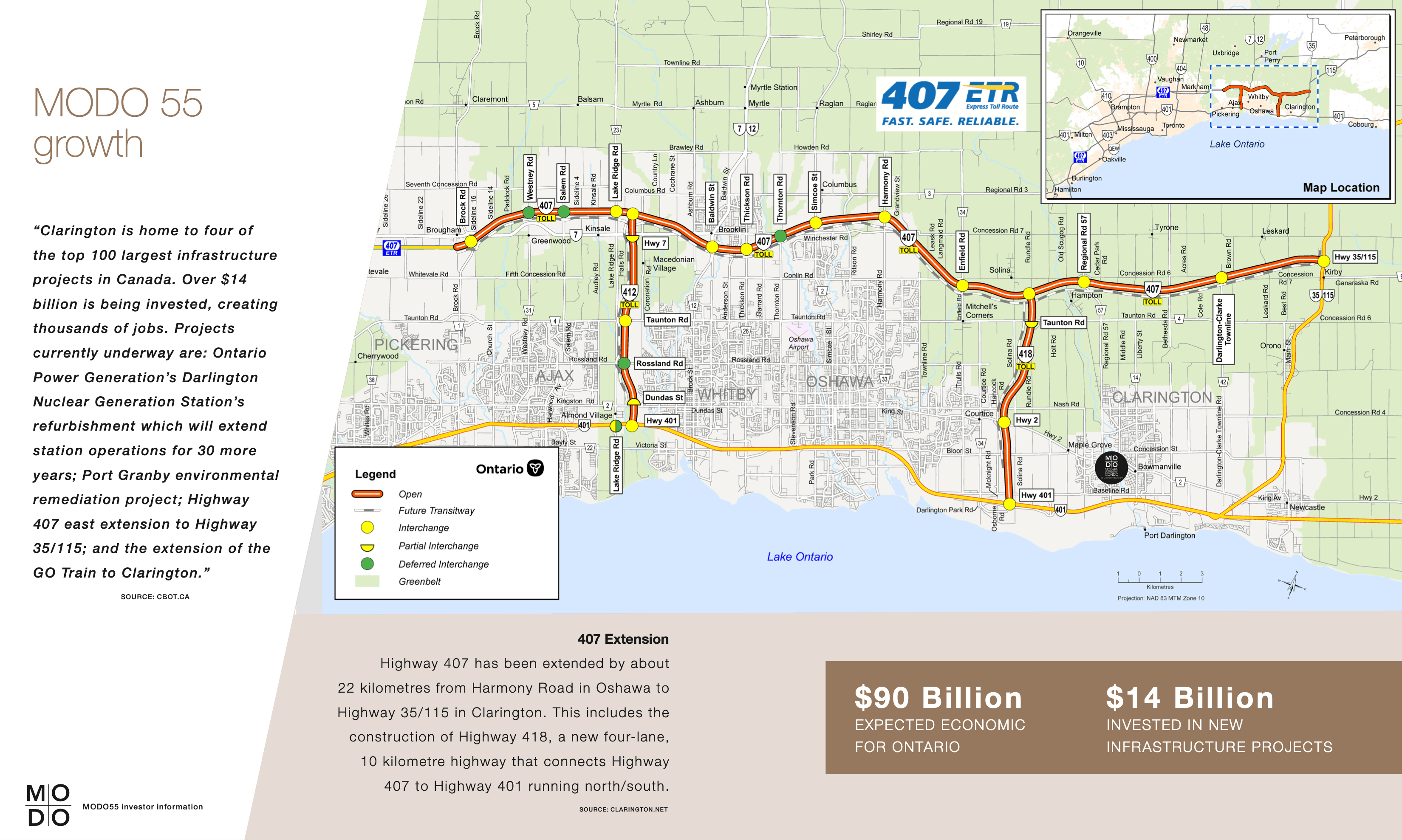 Durham Region is a thriving real estate market that continues to expand year after year. Durham, which surpasses even Toronto, is especially an appealing spot for families searching for homes on Lake Ontario’s shores.

Millions of dollars have been spent in the construction of a new urban centre for the city and nearby areas. Investment options abound in Ajax, Oshawa, and Bowmanville, which are especially appealing to young adults and new families in their twenties and thirties. The Area is commutable to Toronto and also has rustic, slower-paced towns in the north.

For over three decades, Kaitlin Corporation has been an award-winning producer in Southern Ontario. They take pride in creating communities with a focus on the overall perspective. Kaitlin Corporation has designed homes in Richmond Hill, Oakville, North York, Collingwood, Kingston, and other areas, earning a reputation for quality and customer satisfaction. 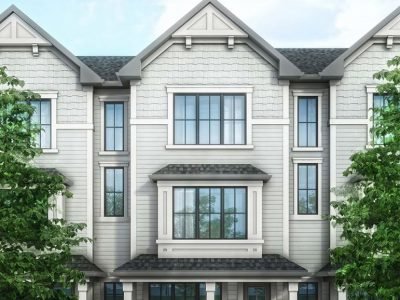 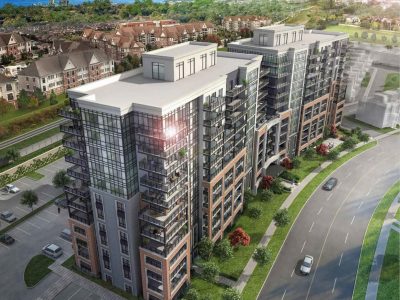