33 Avenue Road Condos is a new pre-construction condo development by Empire Communities. With a total of 78 units spanning across 29 storeys. Coming soon to Avenue Road and Bloor Street in midtown Toronto.

Toronto's Yorkville neighbourhood introduces the city's first vertical forest. New renderings for the long-awaited 33 Avenue Road project bring to light a new design aesthetic. With plantings along the east as well as west elevations of the tower.

The public space fronting Yorkville Avenue—and the restored 33 Avenue property—is now more clearly framed by below the 30-storey tower, which rises above a simple wood-toned plateau. A refined delineation between the tower and the ground level allows the high-rise tower to make an impact on the area skyline without compromising the streetscape, with the space of the existing York Square reconfigured into a more prominent piaza.

Along the tower levels, however, the ambitious landscaping program could garner the lion's share of the excitement surrounding the project. Adapting the innovative 'green' skyscraper model, renderings for 33 Avenue see a more subdued—and presumably winter-friendly—iteration of this design aesthetic. Though the plantings only appear on the east and west elevations, an infusion of greenery would likely make the tower a highly recognizable presence in the area skyline.

33 Avenue Road Condo is in the Annex neighborhood in Toronto. Over the last four years, the Empire Communities and Greybrook Capital development has gradually evolved from a more monolithic tower—which would have replaced the properties currently on the site with a large, blocky podium—to a design that respects Yorkville's street-level ambiance. In the years since the project was first proposed, preservation of the now heritage-designated—as of late 2014—property at 33 Avenue Road (above) emerged as a City priority for the site. 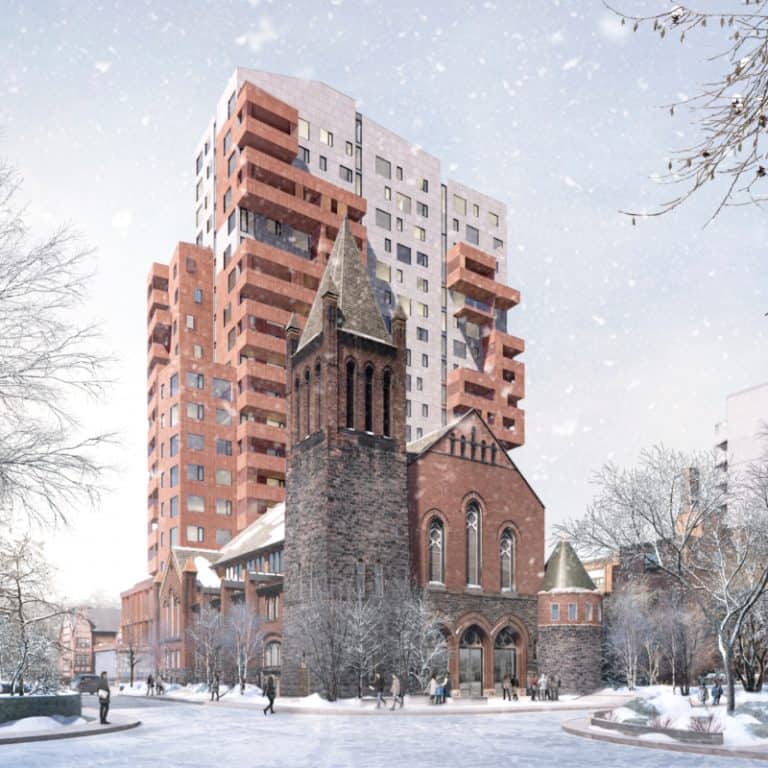