Artform Condos is a new pre-construction condominium being developed by Emblem Developments in the heart of a booming Mississauga neighbourhood just south of Square One. This single building will include some commercial spaces at the bottom and proposed to have a total of 336 units with 17 storeys. 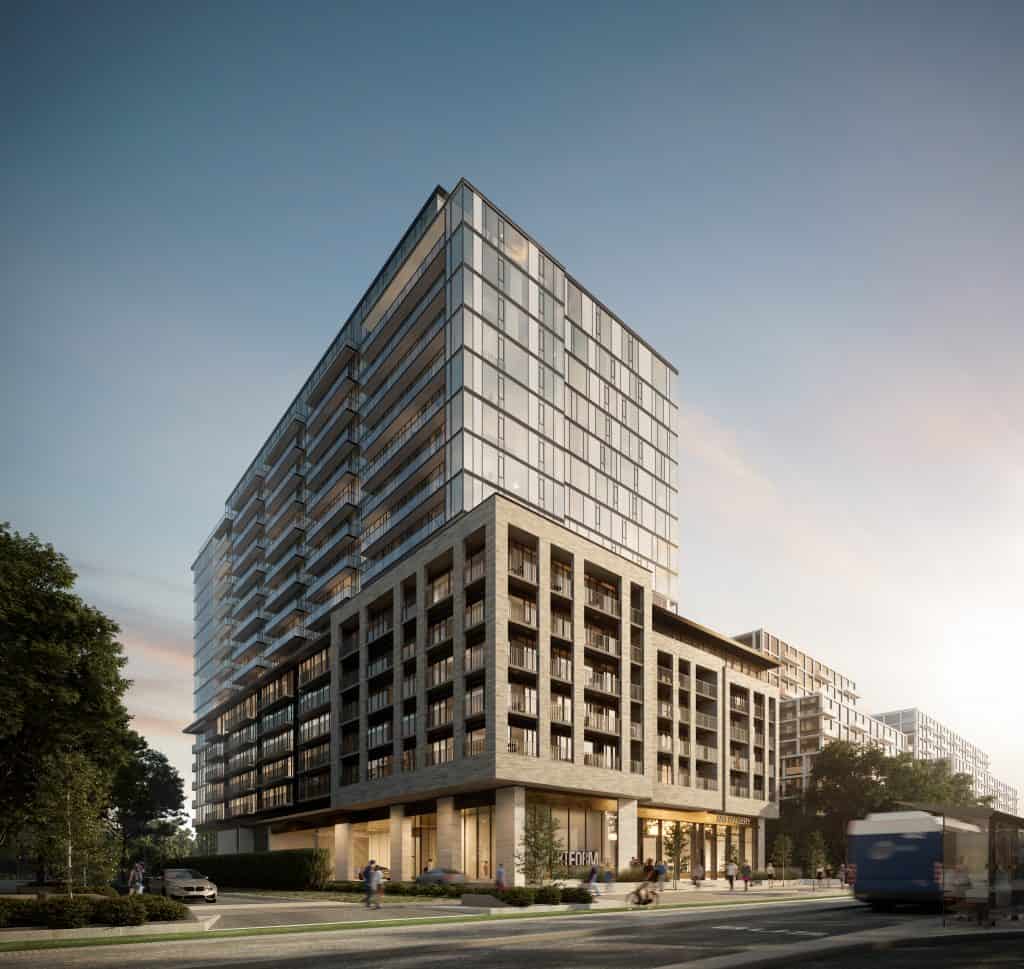 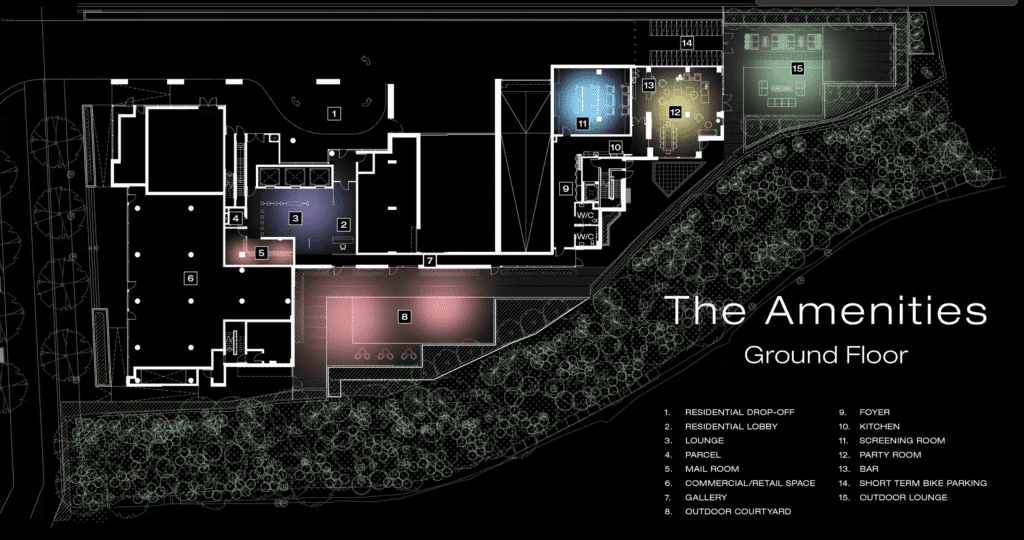 Top 5 Reasons to purchase a condo at Artform

Artform is being designed with the quality of life of it's residents as the top priority. The site will contain 42 metres along Dundas Street West for retail and restaurants, totalling 330 square metres of convenience right at your front door.

The tower will be 17 storeys high, promising great views and with a sleek design centred around a glass facade and clean, modern lines. Residents will revel in Artform's artful mixture of convenience, comfort, and style.

With 336 living units comprising of one-bedrooms, two bedrooms, and even 3 bedrooms, Artform will have living space options for families, students, young professionals and everyone in between! 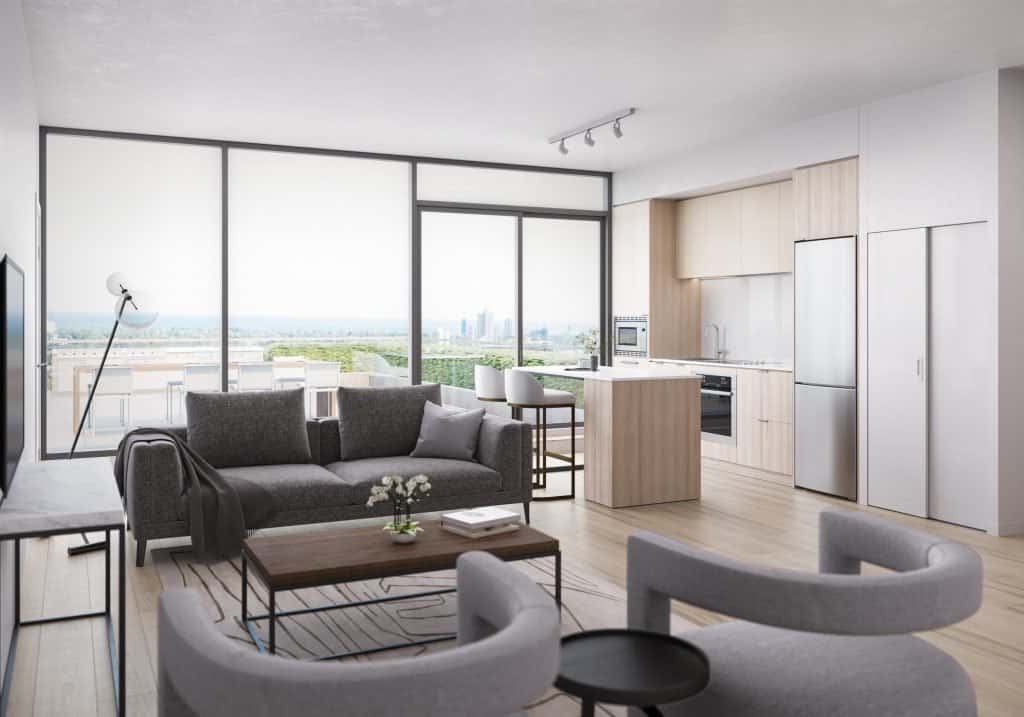 Artform will be part of a larger "Master Plan" for the area of Cooksville in Mississauga. Already along the Dundas Corridor, you can find countless parks, schools, and businesses, stretching from Oakville to the edges of Toronto itself. Dundas is a critical artery for the commuting people of the GTA. Now, Dundas Connects is looking to rejuvenate this corridor, and focus on developing new communities along this essential passage through the city. 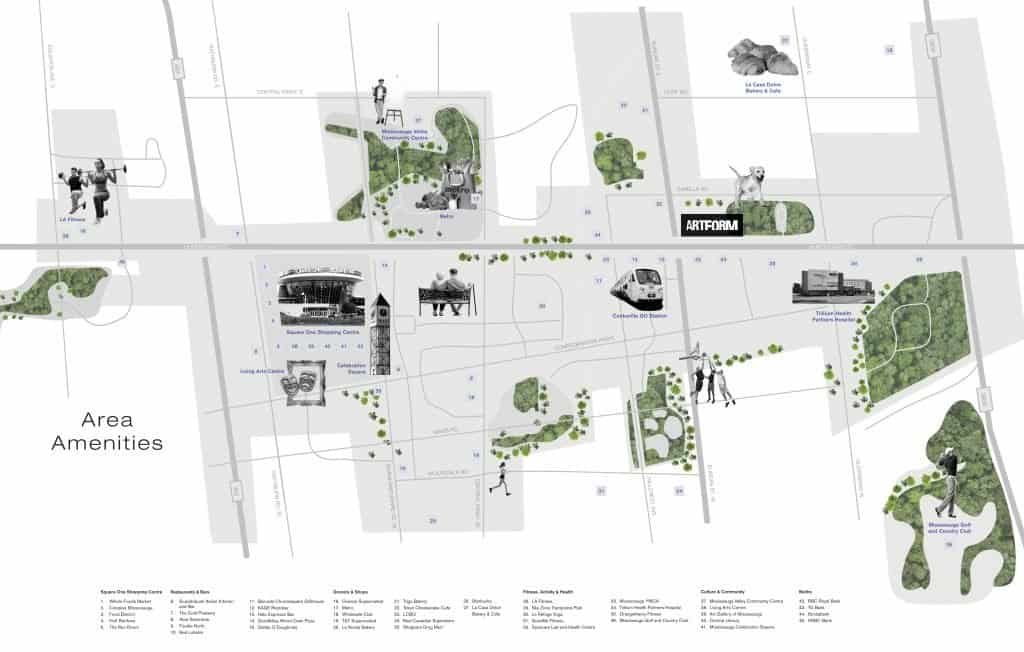 Led by development firm AECOM, the Dundas Connects Initiative is looking to develop the land in a responsible way to provide support for the region into the future by implementing Bus Rapid Transit, redesigning, and committing to a more robust GO Station within the Cooksville borders, encouraging mixed-use development and affordable housing and so much more.

Artform itself will be just 11 minutes walk to the new-and-improved Cooksville GO station, and with new raised bike lanes, and an already excellent walk score of 93, this new community will be an excellent alternative to the condo developments of the past. Simply step out your front door, and find yourself among some of Mississauga's best restaurants and grocery stores, convenient locations for most major Canadian Banks, and if you're looking for more shopping options, Square One Shopping Mall is just a few minutes away! 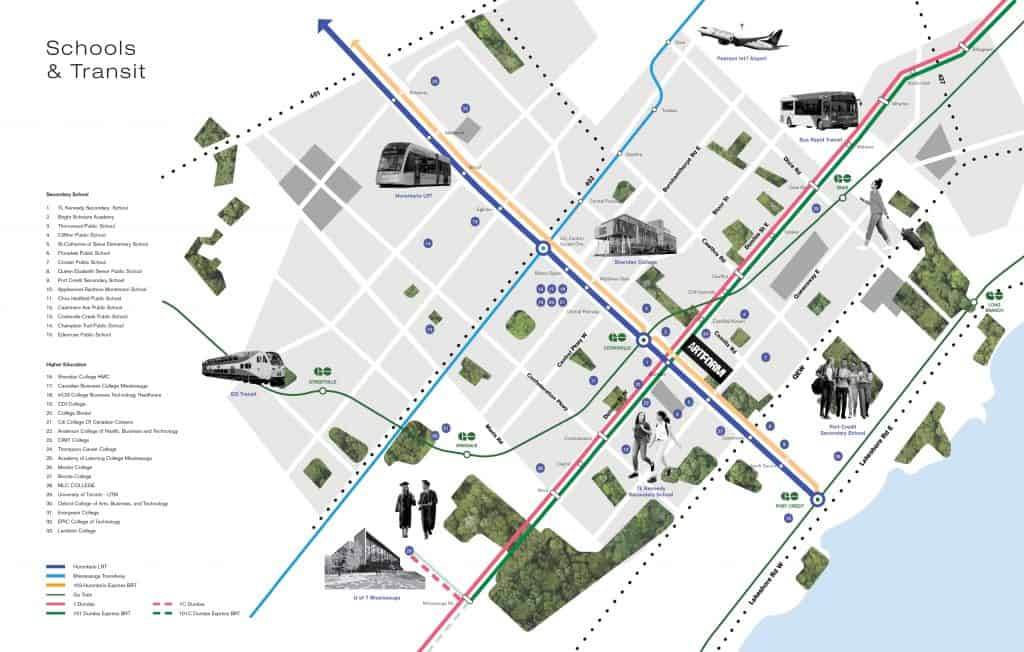 An excellent neighbourhood to raise a family, Mississauga is known for it's many schools and parks, but also for Sheridan College – Hazel McCallion Campus, named after Mississauga's famous mayor Hazel McCallion, who held office from 1978 until 2014.

Artform will also be close to Trillium Health Partners – Mississauga Hospital, as well as U of T Mississauga Campus, Playdium, and the Mississauga downtown core. 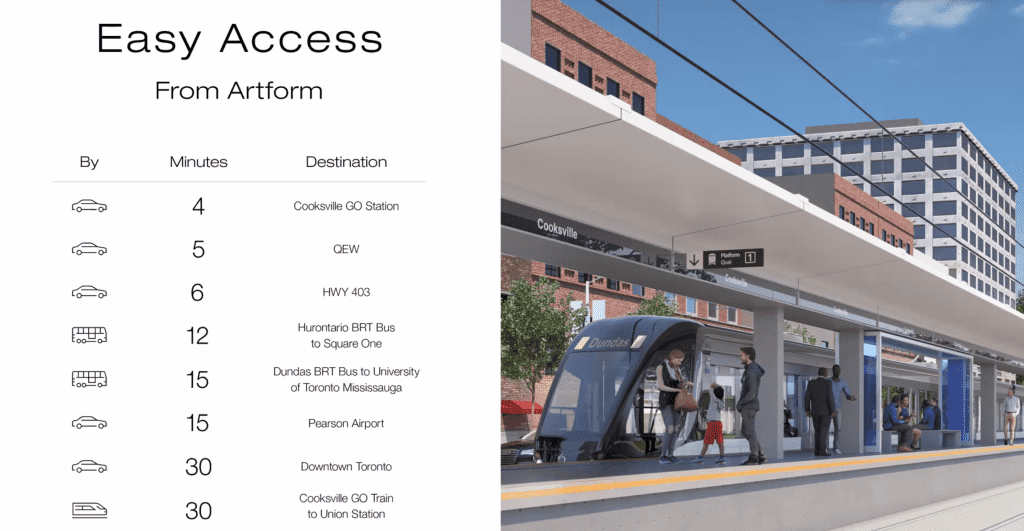 The Dundas Corridor has been an important passage through the GTA for decades. Access to all major highways in the GTA is fast and simple - connection to the 401, 403, 427 and the QEW are quick, making travel between the various boroughs of Toronto and the GTA as well as most of Southern Ontario as convenient as possible. 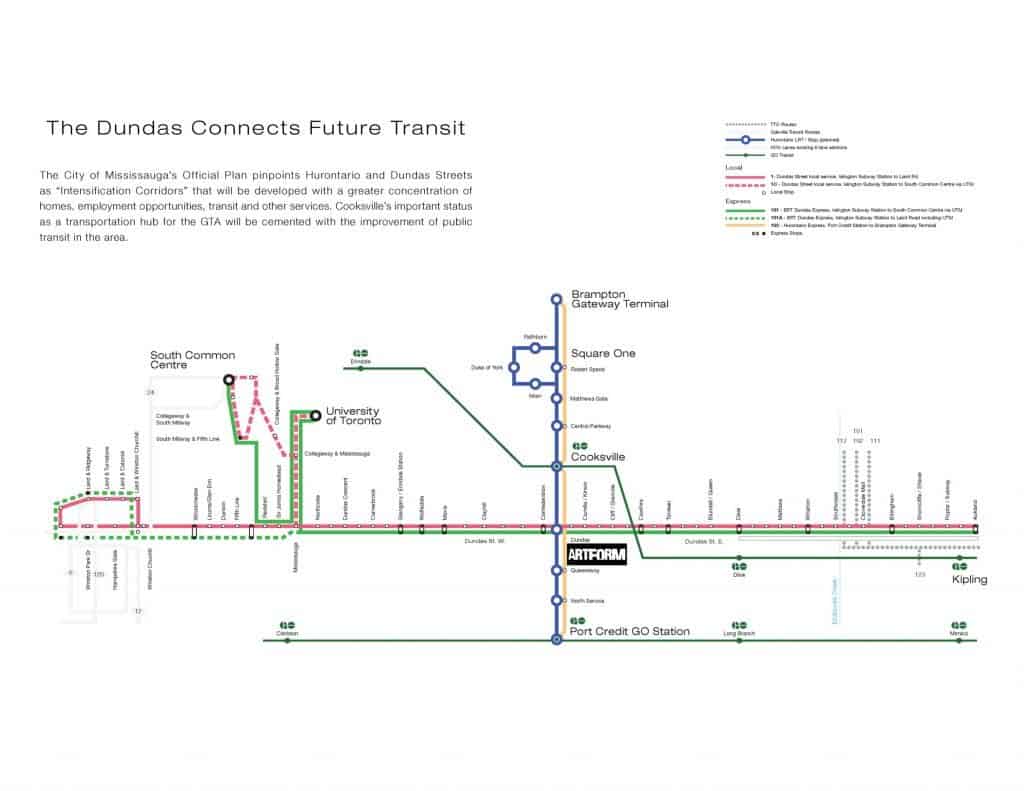 A new Bus Rapid Transit (BRT) system is being implemented along Dundas Street, providing faster public transit for residents of a region expected to greatly grow within the next few decades.

As Mississauga continues to grow, so to do the transportation needs of the city and surrounding areas. The Hurontario LRT system is hoping to fill these gaps, and is currently in the beginning phases. The line will connect Port Credit to southern Brampton and Mississauga, and this new line will have a dedicated stop in Cooksville. 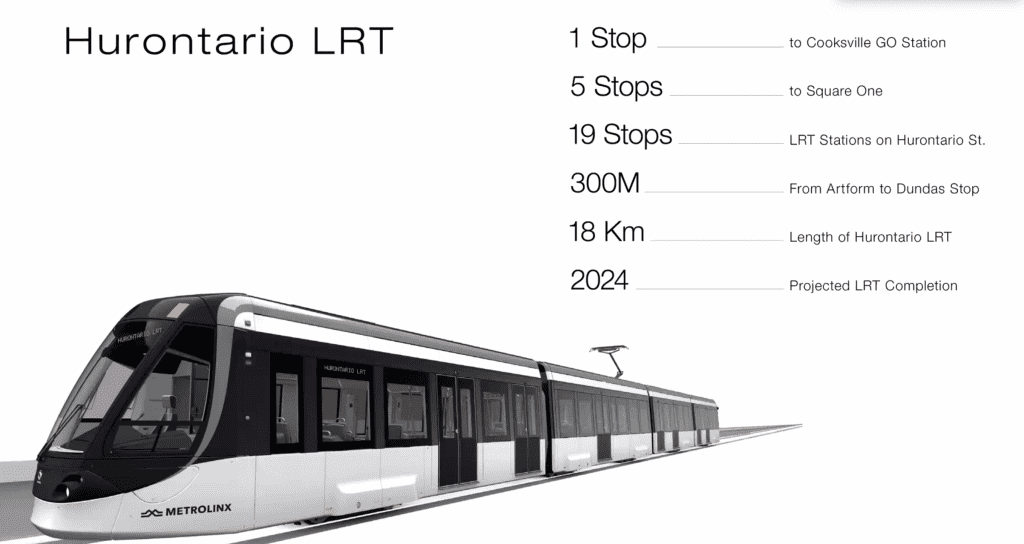 The Cooksville GO station is being completely rejuvinated, new features include a new station building and plaza, 800+ more parking spaces complete with a pedestrian bridge, 8 new bus bays, and a new station entrance on Hurontario street.

No commitment to sustainable development would be complete without an increase in walkability, and bicycle lanes. A large part of the Dundas Connects Initiative is about providing raised, dedicated bicycle lanes on major streets.

The most important thing to Emblem is putting community first. A big focus for this burgeoning developer is that growth must be done sustainably. Innovation and responsibility are the defining strategies Emblem looks to employ as they work together with Mississauga and the Dundas Corridor to improve the lives of the residents of Cooksville.

Emblem is a new wing of the respected firm First Avenue, which is an investment management company founded in 2009, it's CEO Kash Pashootan has appeared in the Canadian Business, National Post, and The Globe & Mail, and was named a Top 50 Portfolio Manager by Wealth Professional.

With all this growth in the Cooksville area, it's easy to see that now is a great time to invest in housing in the area. Within a decade, the Dundas Corridor will be booming, and demand for condos will only grow.

Demand for condos in the area is high, with developers looking to build up rather than out - and dozens of new projects have been started within the past several years. Students looking to be close to Sheridan or U of T campuses in Mississauga will be eager for options with short commutes.

The average selling price of pre-construction condominiums in Mississauga is $379K - a good number for families looking to set down roots, and for homeowners looking to invest. Prices per square foot continue to rise as demand increases, with the average sitting currently at $632.

As the Dundas Connects project begins it's first phases, this will be an increasingly attractive area to set down roots, and with it's style and convenience at the forefront of it's design, Artful will stand above the rest.

It has a great Walk Score of 93 out of 100 and a Transit Score of 66 out of 100. This location is in Mississauga. Nearby parks include Sergeant David Yakichuk Park, Floradale Park and John C Price Park.