Scan QR code and Book an Appointment with our Sales Representatives.

Tridel is continuing it's success with it's condominiums in the downtown core! Introducing MRKT Alexandra Park Condos, a stunning new Condominium, the latest development in the Alexandra Park area of Dundas Street West! Following the immense success of SQ and SQ2, MRKT is the third Tridel condominium in the 18-acre masterplanned community.

This new mixed-use condominium project will make up the western tower of a two-tower, condominium-and-apartment building along the northern edge of the Fashion District.

With the perfect location, great amenities, and a sense of style all it's own, it's easy to see why MRKT is turning so many heads in Toronto's downtown core. To find out more about why we're so excited about this project, keep reading below! 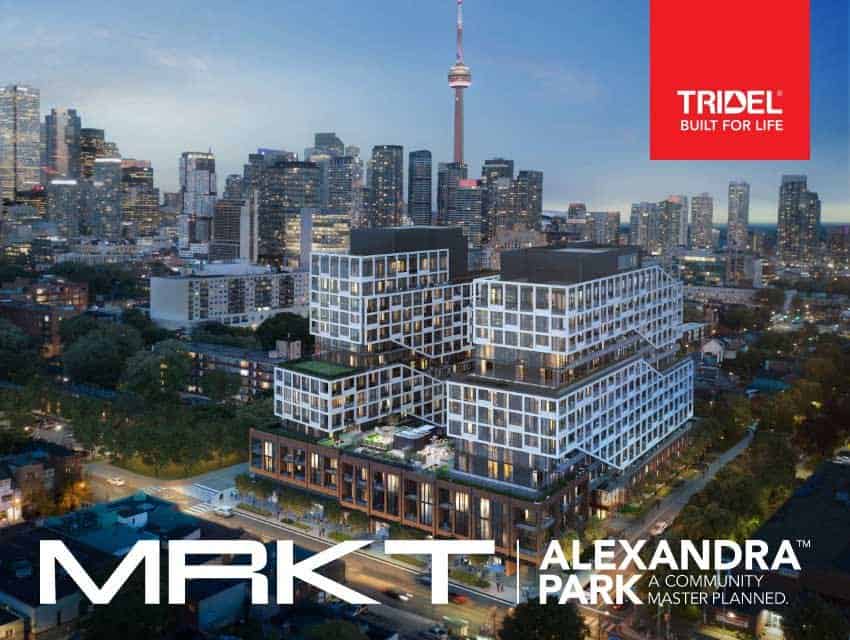 Discover MRKT at Alexandra Park. Where people in the know want to live. MRKT is in the epicentre of downtown Toronto at vibrant Spadina and Queen. Where the best of everything is at your doorstep. Walking distance to higher learning at University of Toronto, OCAD U and Ryerson University. Close to world-class employment opportunities in the Financial District, Bay Street Corridor, and major hospitals. Steps to the offices of innovative new firms and industry leading technology companies. Surrounded by the culture and attractions of the Entertainment District, and the shopping and conveniences of Queen West. MRKT is the third phase in an incredible, master planned revitalization of Alexandra Park that will see it transformed into an exceptional, renewed and vibrant community bursting with parks, green spaces, modern design and inspired architecture. Tridel, Toronto’s most acclaimed condominium builder, is breathing fresh life into this prime downtown neighbourhood.

MRKT Alexandra Park Condos is in the heart of the downtown core. Located at 593 Dundas Street West, this stylish condo building will be steps from some of the best Toronto has to offer.

To the south, the Fashion district is one of the most in-demand neighbourhoods in Toronto thanks to it’s convenience, and incredible lifestyle. Take in Toronto’s most exciting films and rub shoulders with Hollywood celebrities at the TIFF Bell Lightbox. See a show at the Velvet Underground, the Horseshoe, the Rivoli or one of dozens more of Toronto’s best live music venues. Spend the afternoon perusing vinyl at Sonic Boom, then take a stroll through Kensington Market, or simply spend the afternoon cloud-gazing at Fort York, Victoria Memorial Square or the Grange Park. 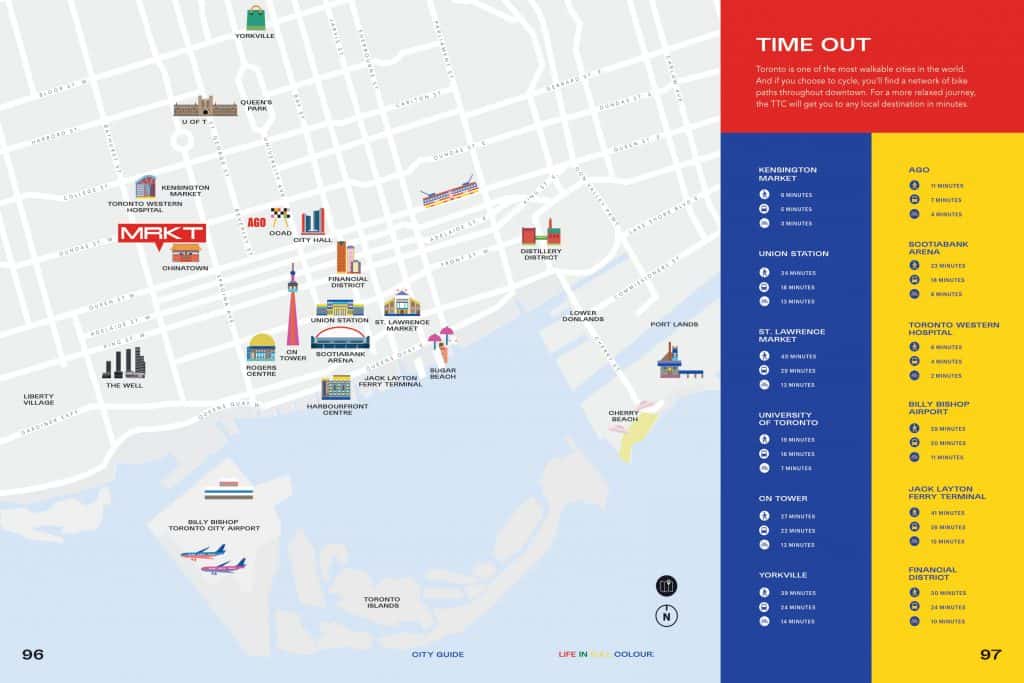 In the west, some of Toronto’s best parks and green spaces, Alexandra Park, the development’s namesake, and just a few minutes further, Trinity Bellwoods Park both contain large open green spaces to soak up the sun, tree-canopied walkways and picnic spots, not to mention dog parks and other fantastic ways to spend a summer day.

Neighbourhoods all around MRKT are some of the most exciting, vibrant places in the city. From Kensington Market, and Baldwin Village in the north, to Little Italy and Chinatown, some of the world’s best food and culture are at your doorstep.

With a walk score of 98, the area of Alexandra Park is perfect for those looking to live within a short walk of all their errands, necessities and entertainment. The Eaton Centre is just a short walk away, not to mention a limitless supply of the city’s most exciting restaurants, nightlife, and “instagramable” hangouts. 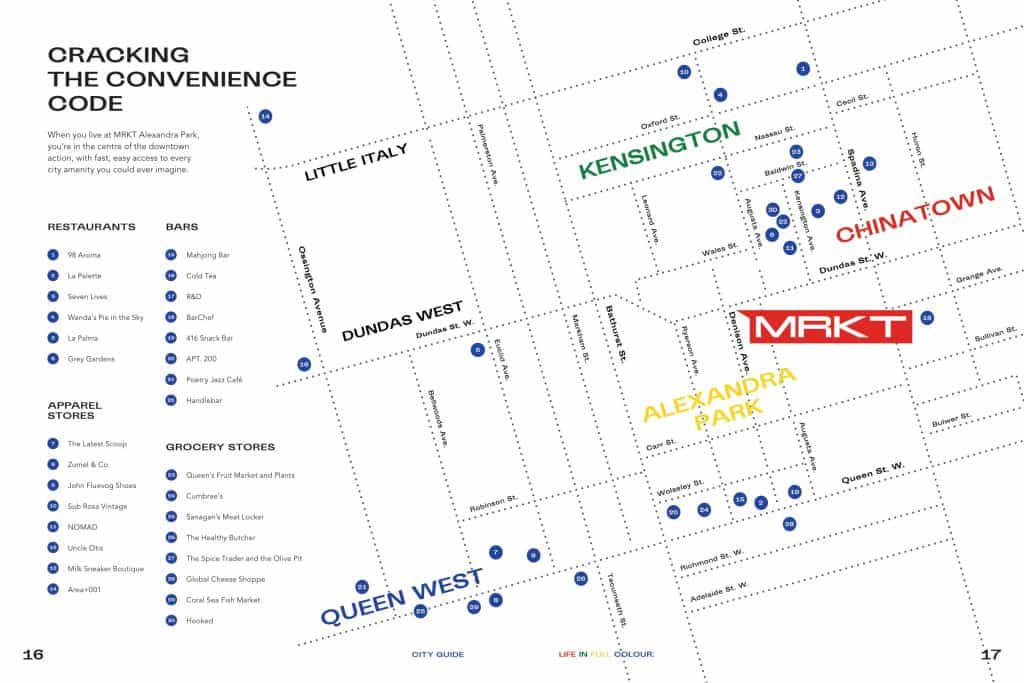 MRKT will be well equipped with many amenities to help residents feel at home. This will include a fitness centre, weight room and cardio centre, plus a yoga and pilates studio.

Residents will also be able to relax after their exercise with the building’s whirlpool and steam room. 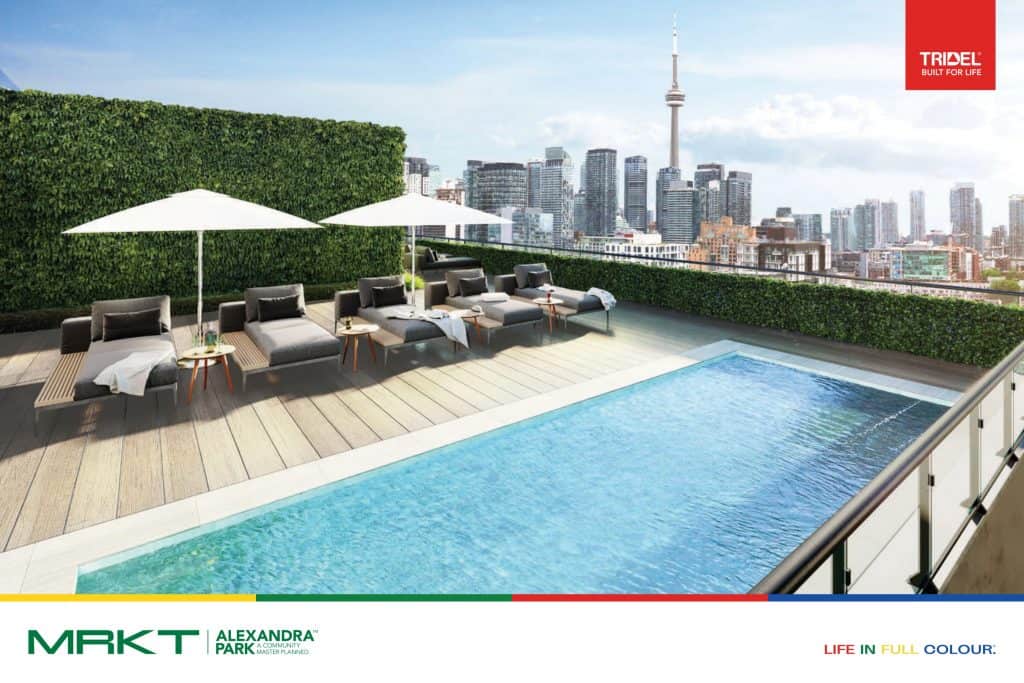 Other exceptional amenities include a theatre room with a big screen tv, as well as event hosting rooms, perfect for gathering friends and family for large meals, or important life events. These rooms will have a connected bar and kitchen.

In addition to all that, a stunning, 2-storey childcare facility will be located on the ground floor, making childcare easy, and making MRKT perfect for young families looking to live in the downtown core.

The building will have a stepped-back design, which will keep it from feeling imposing on the street level, and will also provide excellent space for patios and terraces. MRKT will also have outdoor amenity space, with terraces and balconies for units, a rooftop patio, with hosting spots, and more!

The building itself will feature a modern, cubic design, with white squares making up the face on the top, with brick on the lower levels. This 3-storey podium will act as the bridge between two towers. The eastern one, a 13-storey tower, will house 104 community housing apartments owned by the Atkinson Housing Co-Operative. The second tower in the west, will be 14 storeys, and house 172 market-rate condominium suites. These two towers will be functionally separate, having separate entrances. 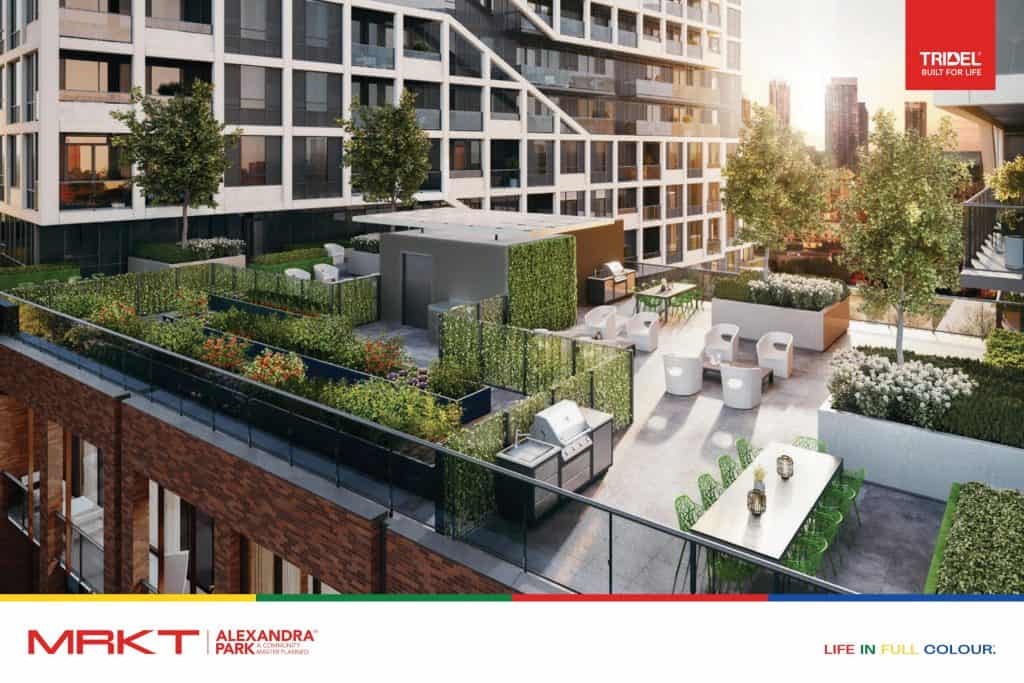 MRKT has a “walker’s paradise” score of 100/100. Set just north of the chic Fashion District, the culturally rich Chinatown, the Entertainment District, and Old Toronto, MRKT is close to just about everything in the city. Groceries, entertainment, clothes and just about anything else you could ever want or need are within minutes walk. Pedestrians can walk all of Downtown’s beautiful, tree-laden sidewalks and pedestrian streets, but those looking to take shelter from the cold during the winter have the option of taking Toronto’s PATH Underground, a series of underground pedestrian tunnels, skyways and walkways. 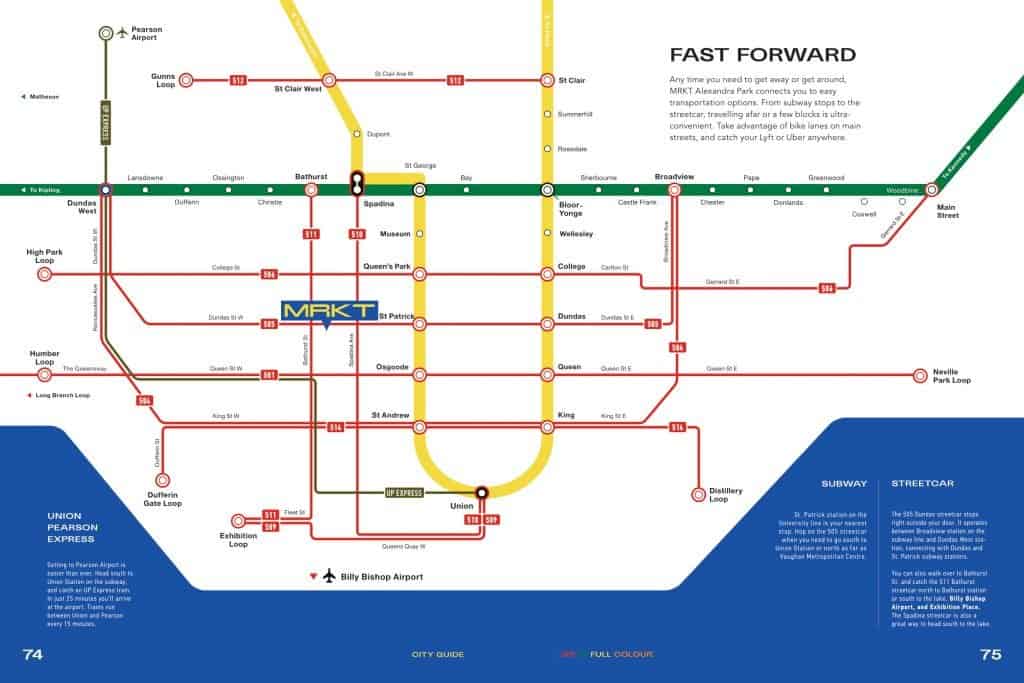 Streetcars criss-cross throughout the downtown core, with stops along Dundas, essentially right out front of MRKT, making for easy connections to the subway at stations like St. Andrews, Osgoode and Union, while others reach north to Spadina or Bathurst station to connect with the East-West subway line. Just about every TTC line converges within the downtown district, and funnels through the hub of Union Station, in the southern end of the Entertainment District. From here, travellers, commuters and explorers alike have seemingly unlimited options. The GO Transit infrastructure runs commuter rail lines across the entire GTA and beyond, and VIA Rail provides intercity transit along the Quebec-Windsor Corridor, the most populous region in all of Canada.

Billy Bishop Airport is only 10 minute car ride away, making flights across North America convenient and relaxing, but if you’re planning a trip further away, transit to Pearson International Airport is simple enough as well, thanks to the relatively new UP train, which starts at Union Station (25 minutes walk away from MRKT) and is an express trip all the way to the Airport in Mississauga. 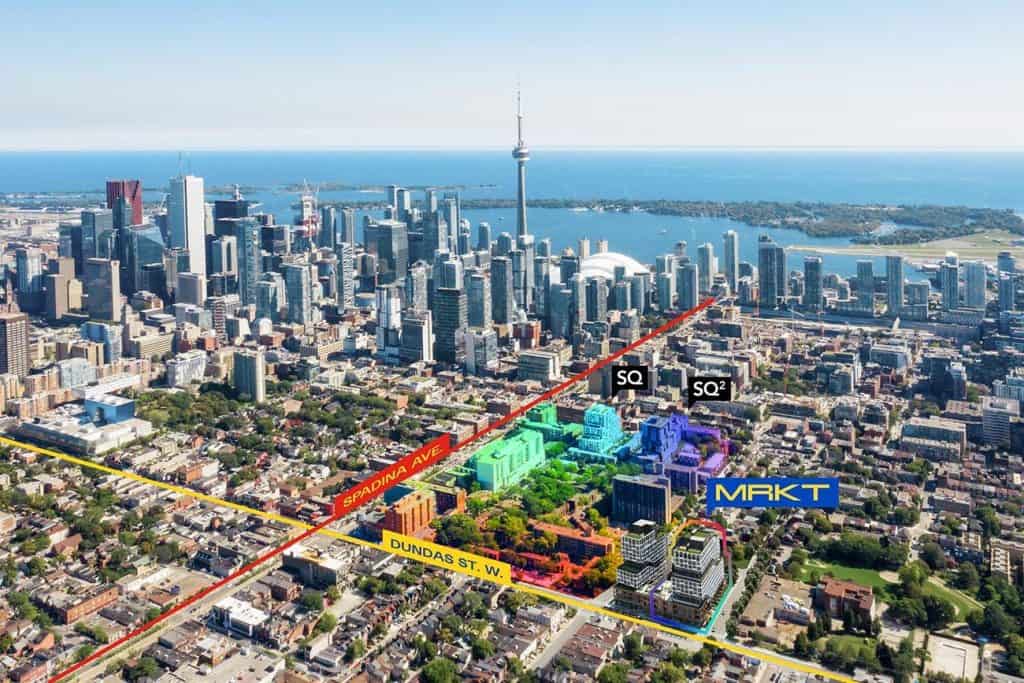 Some of the most exciting condo projects in the entire GTA are rising up right in its core. Areas around Fort York, and the Fashion District are seeing a rejuvenation as new developments break ground and try to bring more density and diversity. With all the students and young professionals looking for short commutes and happening neighbourhoods, great swathes of the downtown are being lit with new youthful community energies, startups, and trendy restaurants.

This growth has pushed even further into the centre of town with projects like MRKT pushing up to the edges of Old Toronto and the Fashion District. The core is a more vibrant place now than it ever has been, and people from all over the GTA are moving further centrally, whether it’s to be closer to work and school, or simply to live where all the action happens – prices for property in the downtown are expected to continue to rise, and investments like MRKT are golden opportunities.

When you combine all of this with a track record like Tridel’s it’s easy to see that MRKT is an exciting prospect on the downtown real estate scene.