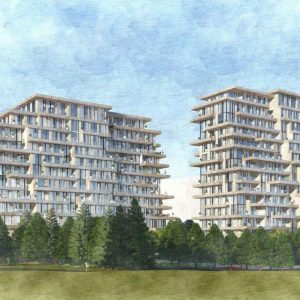 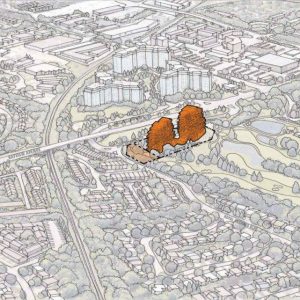 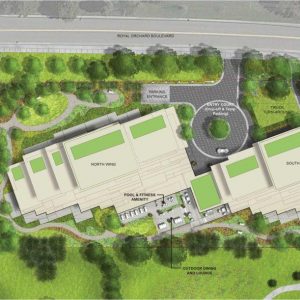 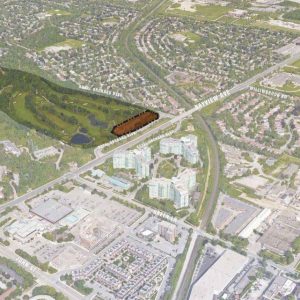 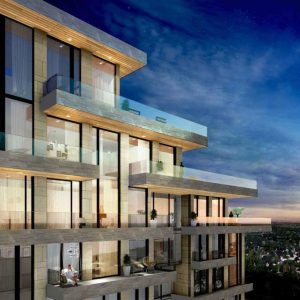 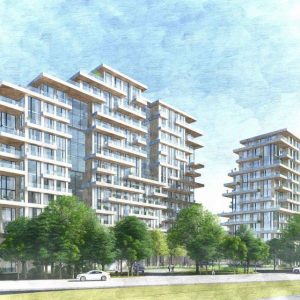 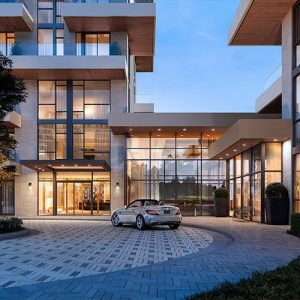 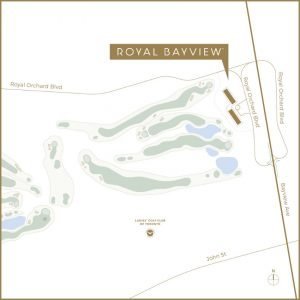 A new stylish condominium project is turning heads in the Thornhill area. Royal Bayview Condos is a brand-new pre-construction development developed by Tridel in Thornhill.

Located at 7859 Yonge Street in Langstaff, Thornhill, this project is making waves for it’s impressive, lavish design and styling. With beautiful views of the two neighbouring golf courses, The Ladies Golf Course of Toronto, and the Thornhill Club, residents will enjoy the best that Thornhill has to offer – convenience and a stellar location – as well as the luxuries of a downtown urban condominium. 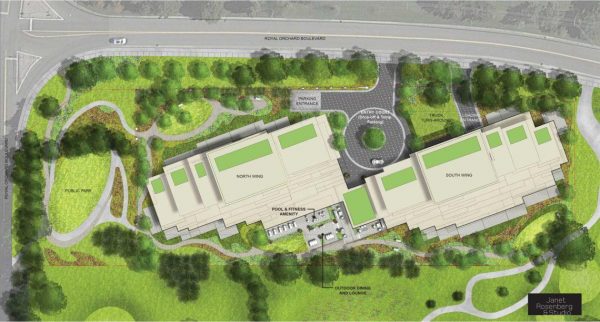 The development represents approximately 2.5% of the golf course, which is the Ladies’ Golf Club, the remaining lands will continue to operate as a golf course. And there are 2 buildings standing together with a total of 14 storeys. 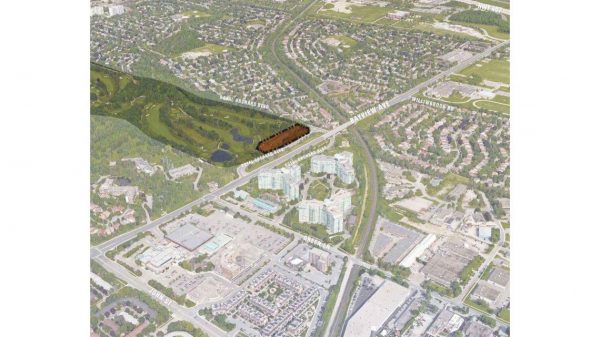 Exclusive backyard of overlooking the beauty of Ladies’ Golf Club of Toronto. This nestled lifestyle is only available for 168 units. Each day brings a natural calm and endless opportunity for you to enjoy active lifestyle.

The developer, Tridel, is one of the best developments in Canada, they provide the latest in environmentally friendly designs and practices including a green roof, bird frindly window treatments, energy efficient devices, and will be seeking to achieve LEED certification.

Langstaff is a charming, historic district in Thornhill. Named for John Langstaff who settled a farm along Yonge Street in 1803, this area has been a residential community along Toronto’s famous “longest street in the world” for over a century. Now a bustling neighbourhood undergoing densification, Langstaff is a pillar of the Thornhill community, and an extremely convenient place to set down roots.

Just a short walk away from the Thornhill Community Centre and Thornhill Square Shopping Centre, Royal Bayview will be a very convenient location for residents looking to be active in their community, or get errands done on foot.  Post offices, pharmacies, grocery stores and elementary schools are all closely as well.

Buyers looking to escape into nature will be happy thanks to the areas many expansive and beautiful parks. Just within a few minutes are Drake Park, Johnsview Park, Bayview Lane Park, and Bayview Reservoir Park all providing different amenities, gorgeous views, and abundant natural beauty.

With so many amenties nearby, plus a very manageable commute into the city, Langstaff makes for a idyllic place to settle.

When it’s completed, Royal Bayview Condos will consist of two condo towers connected by a shared lobby and driveway entrance. This lobby entrance will be designed around creating a grand, lavish entry to the building. Elegant and stylish, this entrance will be curved and strive to a warm welcome to building.

The project is expected to contain a total of 168 units. The 12-storey tower will be called “The Royal”, and will contain 77 suites, while the 14-storey building will contain 91 suites mostly either two, or three-bedroom configurations.

The underground parking garage will be accessible from both towers and will have 367 vehicle spaces. Most of these spaces will be dedicated for residents, but

Connected by a shared lobby and driveway entrance, Royal Bayview Condos will consist of two condo towers All told, the development will contain a total of 168 living units, the 12 storey tower known as “The Royal” has 77 suites and the 14 storey tower known as The Bayview has 91 suites  that will be configured in room layouts of two and three-bedroom suites.

Both buildings will be served by a three-level underground garage that will provide space for some 367 vehicles. While most of these spots will be for residents specifically, it’s expected that a dozen or more will be for visitors in a dedicated section.

Royal Bayview will be looking to live up to it’s name, including a number of extravagant amenties. These features include an indoor pool and whirlpool, providing a relaxing, refreshing way to spend a few hours all year round.

The developers are also ensuring that the Royal Bayview project remains current and up-to-date with new environmental standards. A focus on environmentally friendly design has been a big emphasis for the project, including a green roof, window treatments that are bird-friendly, and energy-efficient devices in suites and amenity spaces. Those amenity spaces include 750 square metres of total space, including a fitness area, a party room, and more.

Royal Bayview Condos will be right next to a major artery of Toronto – the world-famous Yonge Street. Though the street may not be the quickest way into Toronto, it remains a highly important street in the GTA, and a major reason Langstaff has been such an important area and has developed the way it has.

Richmond Hill Centre/Langstaff GO Station is just 8 minutes away by car, providing the perfect option for those who commute into the city on a daily basis, or alternatively, residents can drive south ten minutes to the Finch station, and from there, simply ride the TTC’s Line 1 directly into the city to Union Station.

Transportation within the city of Vaughan and to it’s neighbouring municipalities within the York Region is simple and affordable, with the aptly named York Region Transit (YRT) providing unparalleled bus service and rapid transit with over 20 routes.

A staple in development in Toronto for over 80 years, Tridel has built projects incorporating cutting-edge architecture, and bold ideas that continually re-invent the city’s skyline. Their buildings can be seen all over the GTA, from North York to the downtown core and in every direction across the six boroughs of the city. In total, the company has built over 80,000 homes for Torontonians.

After building up experience over eight decades, Tridel has a reputation for building homes that last. And with their ubiquitous nature across the city, it’s likely you’ve walked passed one of their projects before!

York Region’s housing market continues to grow. Many of the municipalities within the region have begun new development doctrines focusing on increasing density, and emphasizing sustainability and mixed-used development. This means more condos for each of York Region’s largest communities. New projects are beginning in Markham, Vaughan, and Newmarket, all with the intention of building out the city’s downtown core and cultivating new communities and opportunities for residents.

Thornhill has been one of the GTA’s most quickly-densifying neighbourhoods. With a wide variety of neighbourhoods, townhomes and condominium projects, the area has just about everything residents of the GTA might need, and any lifestyle they might choose.

While the population is currently around 139,000, that number is expected to keep growing as the downtown core of Toronto continues to expand and densify. Since the mid 2000s, development has focused on building up, rather than out, and developers are finding new and better way to build communities around condominium projects.

Average selling price of pre-construction condominiums sit between $300K and $500K, and the market has a high demand for condominiums – with more of the region having a very low vacancy rate and new projects starting for buildings up to 40 storeys.

This project in particular looks to set a new standard both for luxurious lifestyle, and green-friendly initiatives, and will likely be a hot seller in the Thornhill condo scene. 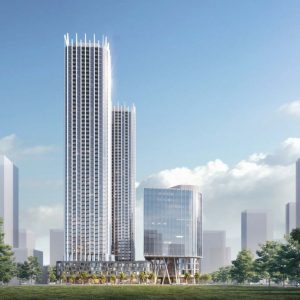 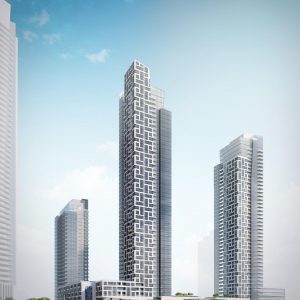 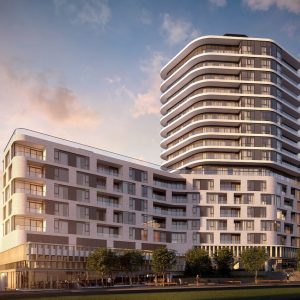 The Mackenzie Condos in M... 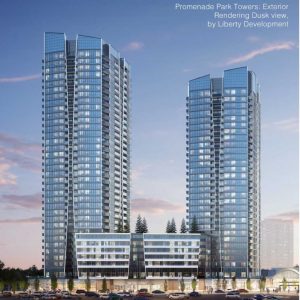 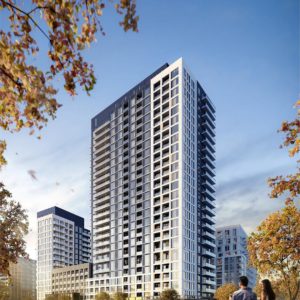 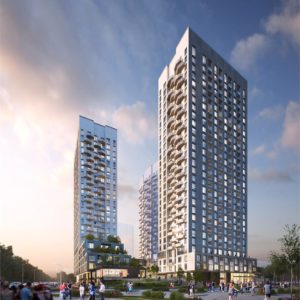 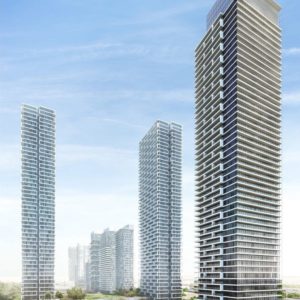 Pine Valley and Teston To... 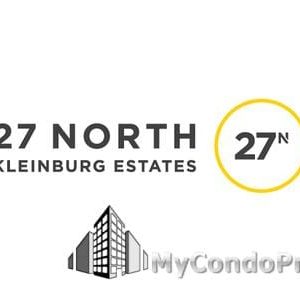