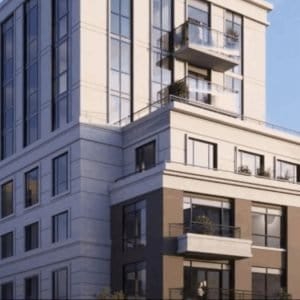 The Rose Hill Condos is a new preconstruction boutique style condos development in Woodbridge by Capital North Communities. It offers a total of 81 units with 6 storeys high at 197 Woodbridge Avenue.

Top Reasons to Invest in The Rose Hill

The Rose Hill Condos is located in Woodbridge. Woodbridge is family-friendly community and an excellent place to set down roots. With a wide array of stores and services, local hangouts like restaurants and bars, Woodbridge is a place to shop, work, and come home to. Albion shopping centre, Woodbridge Square, and SmartCentres Woodbridge are nearby shopping centres, with access to just about anything you could ever need, and with convenient parking and access.

The region, which was once farmland, has become a vibrant community amidst the GTA, with many choosing to settle here thanks to it’s many amenities, and it’s convenience for commutes into the city, as well as it’s proximity to institutes of higher learning like York University and Humber College.

Many parks, sports facilities, and other green spaces and amenities like Canada’s Wonderland make it an ideal place for families looking to live close to many places to take the kids, enrol them in sports, or just appreciate nature.

Part of the larger city of Vaughan, which is itself within the larger Regional Municipality of York, just north of Toronto. With Caledon and Brampton to the west, King City and Richmond Hill to the north, Markham and Richmond Hill to the east, and Toronto to the south, Vaughan is just close enough to enjoy the big city, without being caught up in the hustle and bustle.

Transportation within the city and to it’s neighbouring municipalities within the York Region is simple and affordable, with the aptly named York Region Transit (YRT) providing unparalleled bus service and rapid transit with over 20 routes. The city is also connected closely to Toronto with it’s own stop on the TTC Line 1 Yonge-University line. Vaughan Metropolitan Centre Station is a hub for travel across the GTA, with an easy 40 minute ride to Union Station in the heart of Toronto. Meanwhile, the convenient York University GO Station is accessible from the Yonge University Line, or is just a 18 minute ride by bus. Another TTC option is the Pioneer Village TTC Station, which is 22 minutes away by bus.

The entirety of southern Ontario is just a short drive away from Woodbridge. Highways 400 and 427 serve as major expressways connecting the city of Vaughan to Barrie, Lake Simcoe, and the Muskoka region, as well as into the core of the city of Toronto. Meanwhile the city itself is laden with a grid of county roads, many of which are 4 to 6 lanes, and provide easy travel within the city’s unique communities, and act as an excellent alternative to the occasional congestion of the GTA’s major highways.

Woodbridge has been rapidly growing since the beginning of the 21st century. Vaughan itself has nearly doubled in population since the early nineties, and Woodbridge is once again preparing for a real estate boom in the near future. New high-rise condominiums are being planned for the centre of the city – with emphasis on urban density and street-level activity. Street retail, boulevards, bike lanes, and green spaces will all lend a comforting, “downtown” feel to these new developments.

As these new communities begin construction, the average selling price of pre-construction condominiums in Woodbridge sit in the low $400K range, but continue to rise, with the average price per square foot at around $679. Demand for Condos is skyrocketing for the city as a low vacancy rate encourages more development and the city continues it’s rapid growth.

For these reasons, it’s easy to see why a project like The Rose Hill was planned in the first place – it is a perfect fit! A refreshing mix of sustainable homes, with higher-density condo living, all coming together to make one ideal community in the heart of Woodbridge.