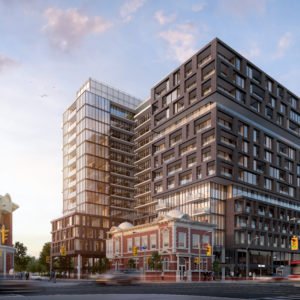 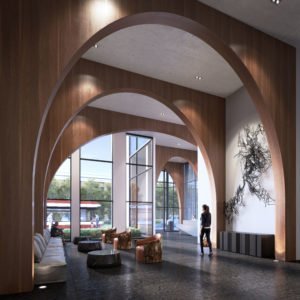 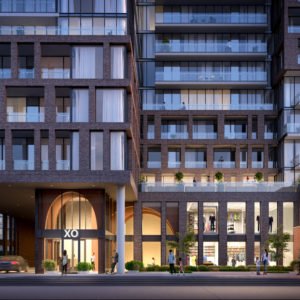 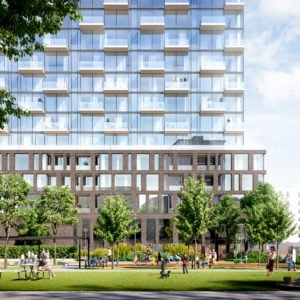 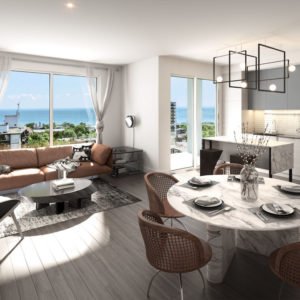 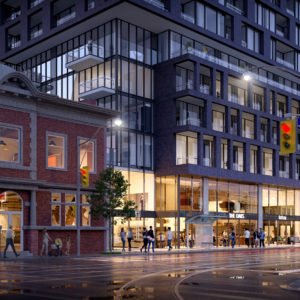 Phase 2 is beginning on one of Liberty Village’s most exciting condo developments! XO2 Condos is a new mixed-use condominium project developed by Lifetime Development in Toronto. Located across the street from Phase 1 at 182 King St W, XO2 will mark the spot for urban living, stylish design, and downtown convenience.

19-storeys tall, with 400 suites, this development will be a new cornerstone in the Liberty Village Community. 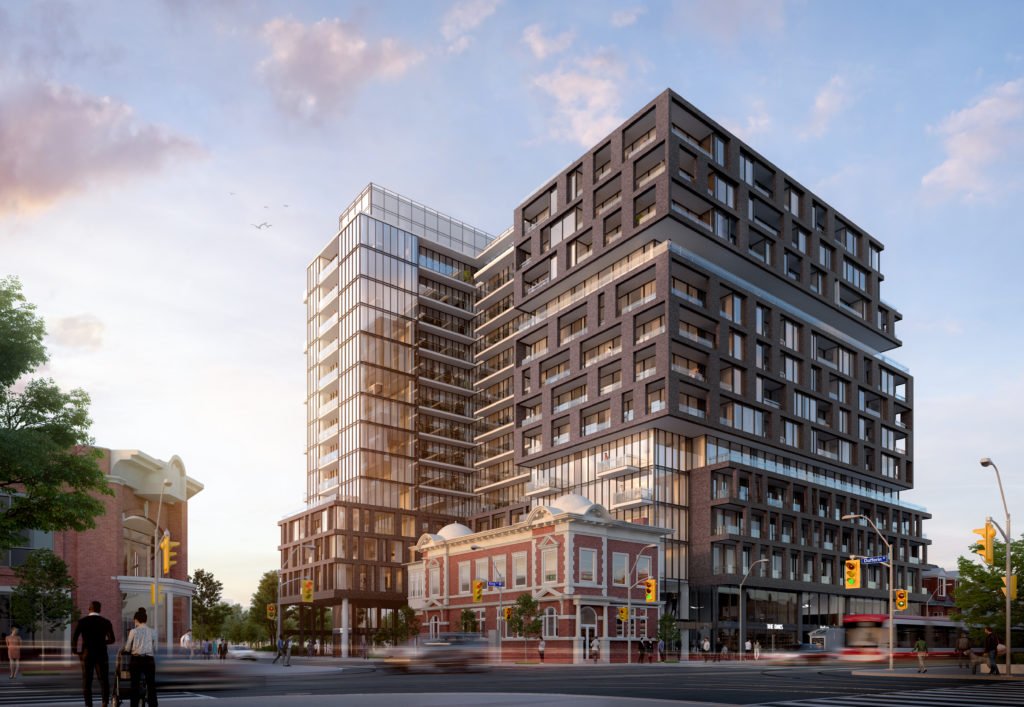 One of the newer neighbourhoods in the downtown core, Liberty Village is a thriving, high-rise residential neighbourhood that’s only minutes walk to just about everything in the city. This charming area sits just west of King West Village, and just south of Queen West. Enjoy stunning views of Lake Ontario from your window, or take a stroll out your front doorstep to the many beautiful lake-side parks like Marilyn Bell Park, or Fort York. Spend summer days at the historic Toronto Exhibition, or ride your bike along the lake shore.

Just out your front door, the Dufferin bus, and the 24-hour King Streetcar take you anywhere you need to go throughout the downtown core. You’re just a short trip away from Toronto’s world-famous entertainment district. And thanks to a BIA effort building momentum in the area, you’ll want to walk even more! The LVBIA and the Residents Association have begun an initiative to improve the walkability and the bicycle paths in the neighbourhood, ensuring that residents don’t even need their cars or mass transit for most travel in the area.

It’s not often you find a neighbourhood as special as Liberty Village. A small community yet it exudes so much energy and life. There is so much to explore and see – and thankfully, with a walk score of 93/100, this close-knit area is very accessible and fun to walk around.

Each building in the XO development will be a distinct building, as opposed to the common two-building, one podium approach many developments are applying lately. This is because the two phases of XO are actually across the street from each other! This means that for all intents and purposes, XO2 is it’s own condominium entirely.

The ground floor of the project will feature 1,927 square metres of commercial and retail space. Meanwhile below, 337 parking spaces will spiral down three storeys, providing ample space for both residents and visitors.

A number of indoor amenity facilities will be available in the building’s mezzanine as well, from a fitness centre, yoga room, theatre, entertainment centre and a lough are all expected. These interior amenties will connect with an outdoor amenity space, including a BBQ area with seating – the perfect place to host events and family get-togethers.

Inside the suites, residents will enjoy luxury features and finishings, with some of the most stylish and functional appliances around. Open-concept living spaces are the key for the developments floor-plans. Large, open areas that merge comfort and livability, and feel spacious and bright. The floor plans currently range between 400 and 1,100 square feet.

Transit within Liberty Village and throughout the downtown core couldn’t be easier. First of all, the neighbourhood has an excellent walk score of 93/100, making it very convenient for pedestrians and cyclists. A short walk will connect you to dozens of lines within the TTC – first and foremost – residents have easy access to streetcars that criss-cross around the borders of the neighbourhood on streets like Queen West and Dufferin. From there, connection is simple to the TTC’s subway lines like the Yonge-University Line and the Bloor-Danforth line.

Major transit lines all funnel through the hub of Union Station, in the southern end of the Entertainment District, just a few kilometres east of Liberty Village. From here, travellers, commuters and explorers alike have seemingly unlimited options. The UP Express Train connects Union to Lester B. Pearson International Airport in Mississauga, the GO Transit infrastructure runs commuter rail lines across the entire GTA and beyond, and VIA Rail provides inter-city transit along the Quebec-Windsor Corridor, the most populous region in all of Canada.

For just about every transit need, Liberty Village is convenient and centrally located, yet the neighbourhood itself, being more pedestrian focused, manages to feel like a smaller town within the larger downtown core.

Lifetime Developments is a staple of urban development in Toronto. With over three decades of experience, Lifetime has a reputation for building high-rising urban mixed-use properties that bridge communities and are steeped with style and convenience.

Starting with single-family homes in the suburbs of the GTA, Lifetime is now one of the leaders in Toronto’s condominium development. Co-founders by Mel Pearl and Sam Herzog attribute their success to the solid partnership they developed, first as competitors in the low-rise sector. With an impressive portfolio including Liberty Market Tower project nearby, and Panda at Yonge and Dundas, Lifetime is quickly making it’s mark on the Toronto skyline.

Lifetime is committed to innovation, and seeks to improve communities in the most efficient manner. Over the next few projects, Lifetime plans to add 5,000 new units to the ever-growing population of Toronto. XO2 is a another testament to the company’s vision of building real estate masterpieces that are centred around the betterment and fulfillment of it’s residents.

In Downtown Toronto, condo development boomed throughout the 2000s and 2010s as the entertainment district was filled in more densely – condos were sprouting up left, right and centre, among the district’s many tourist and entertainment hubs, and now we’re beginning to see 21st century development priorities – community sustainability, and style, design and amenties proliferate throughout the downtown core and into surrounding neighbourhoods. Nowhere is this exemplified better than Liberty Village – a neighbourhood of the city that would be completely unrecognizable 20 years ago. This vibrant area is thanks in large part to a boom of construction, and now it is coming into it’s own as a destination for people to set down roots.

With the first phase of XO, Lifetime has shown what their vision for Liberty Village can look like. Now, the team is ready to expand into it’s second phase across the street, and carry on the success of the project into the next decade. Liberty Village, though young, continues to settle as one of Toronto’s most livable neighbourhoods, and XO2 represents a continued maturation of the area.

Average selling price of pre-construction condos in Toronto is at a healthy high $400K range, meaning that despite all the existing developments, the hunger for new properties is alive and well and now is still an excellent time to invest in the projects throughout Downtown. Just spending an afternoon in Liberty Village, and taking in the majestic views of the city’s awesome skyline and beautiful lake is enough to make you never want to leave. With it’s convenience, and culture, Liberty Village is a great place to invest. 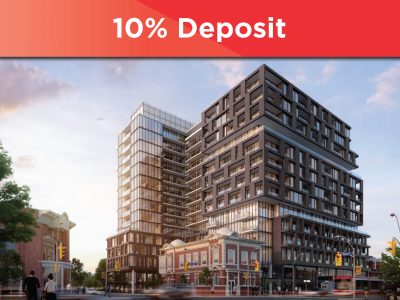