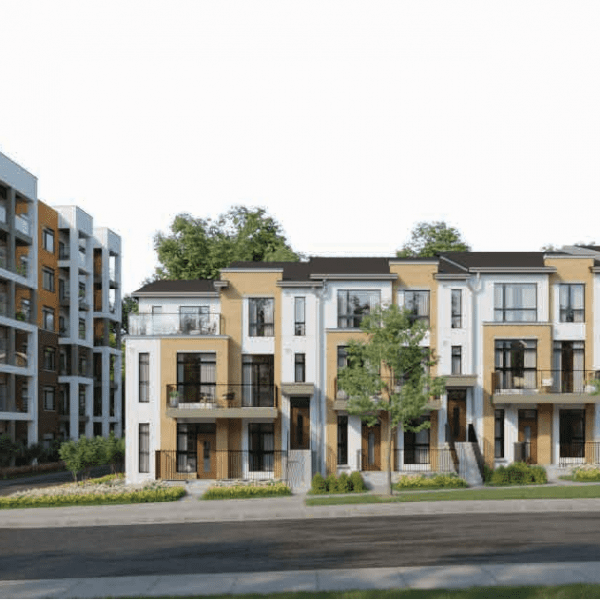 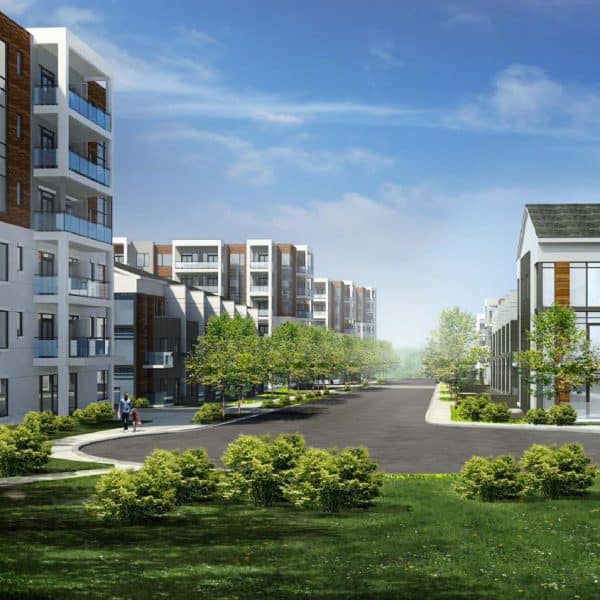 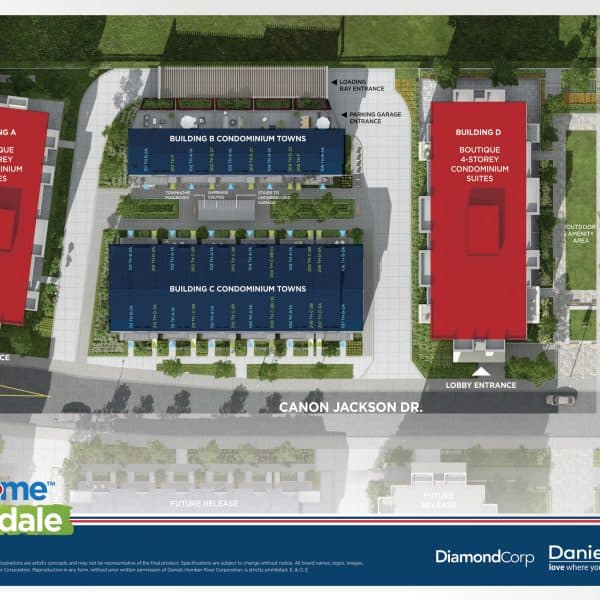 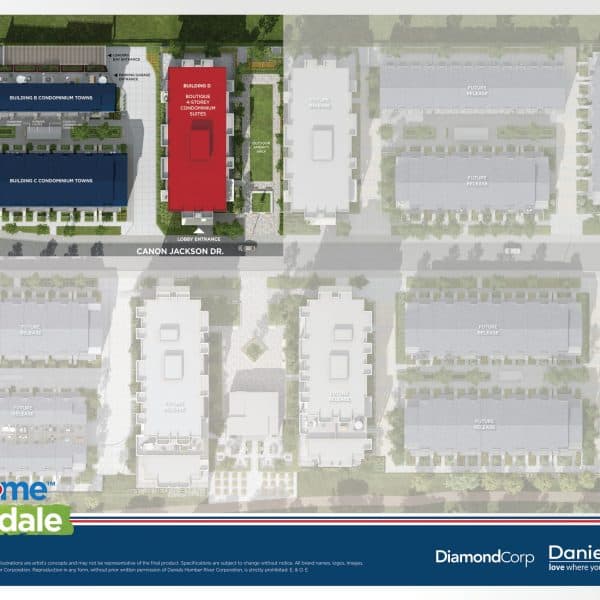 A bold new project is coming to the Keele area of York. On the site of what was once the Humber River Hospital, 12 acres of land are being turned into a master-planned community. Introducing Daniels FirstHome Keelesdale Condos and Towns!

This new pre-construction project by the Daniels Corporation will be a mix of condo towers and townhouse blocks, that will be just north of a station on the brand-new Eglinton Crosstown. With the densification of this neighbourhood well on it’s way, this community is expected to turn many heads, from families to students alike.

The condominium building consists 6 stories with 380 residential units for condos & townhomes where they will be just minutes from everything convenience! 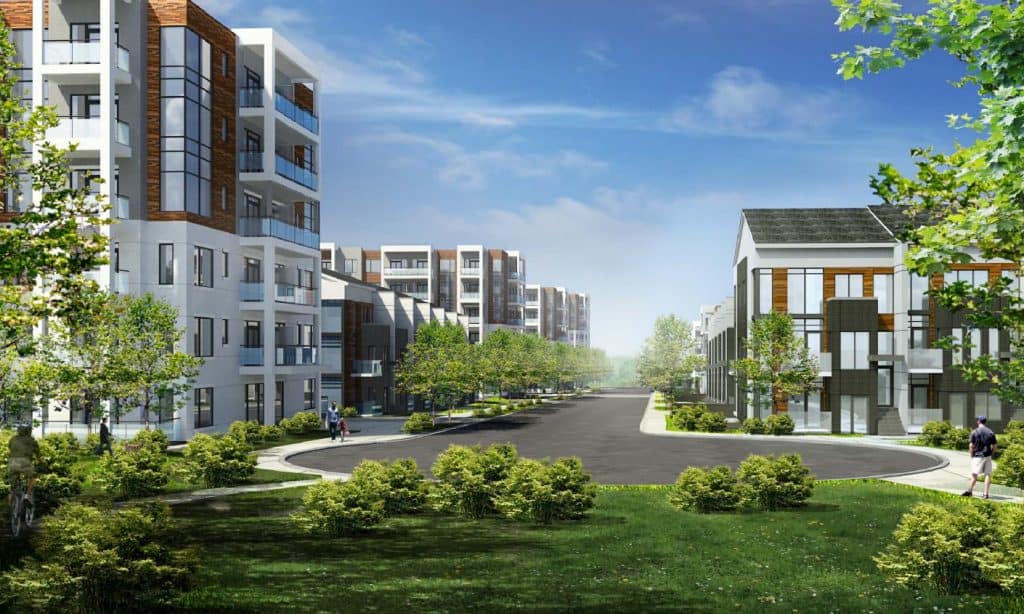 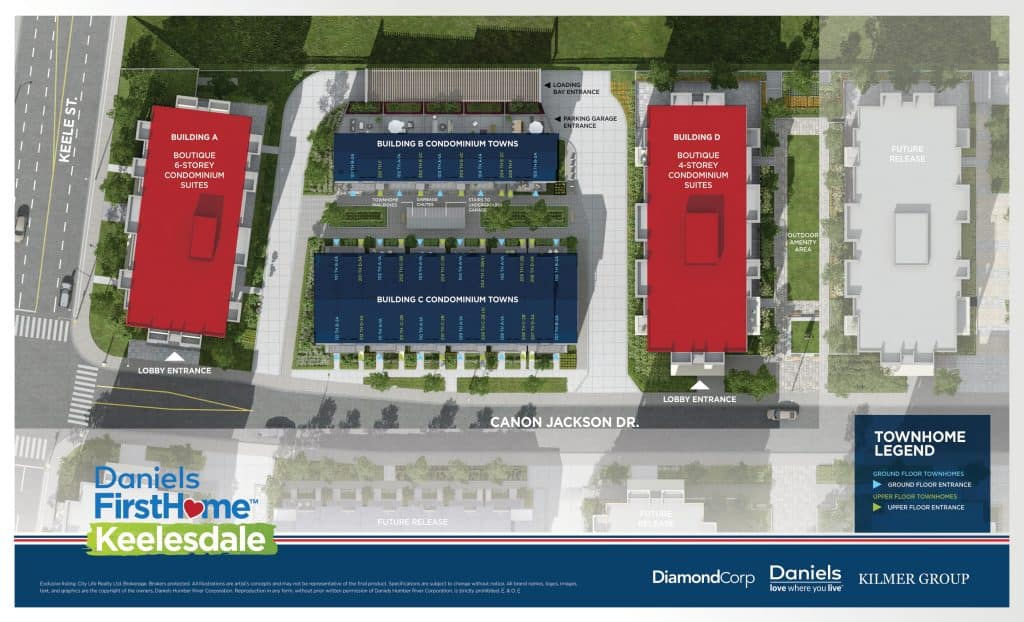 Located at the intersection of Keele St. and Ingram Drive, Daniels Keelesdale Condos and Towns are located in a neighbourhood called Amesbury in York . Running along Black Creek, this area is surrounded by greenbelt and parks – from the Westview Greenbelt and Amesbury Park in the North and west, to smaller, local parks like Gulliver Park just around the corner, and Woodborough in the east, Daniels Keelesdale is in a convenient area with plenty of escapes into nature.

Just eight minutes by car from the Glencairn TTC Subway Station, as well as the Yorkdale Shopping Mall, as well as York University and a number of business parks and office buildings, Keelesdale will be an attractive place for young professionals, students, and families alike.

Being so close to the TTC makes it an excellent spot for York University (or even Ryerson and U of T students) to commute to school in minutes, and for young families, the appeal of a downtown hustle and bustle, and a slower more suburban lifestyle find a happy medium in North York.

Families have the choice of plenty of nearby schools like  George Anderson Public School, and Immaculate Conception Catholic School, as well as daycares and Montessori schools. Also Glen Long Community Centre nearby is home to a number of arts, fitness, sports and camp-related register programs, as well as a pool and other community amenities.

Many outlets, services and stores are just a short drive away as well: Canadian Tire, Rogers, Freshco, as well as Nofrills, Metro, LCBO and Walmart are all within five minutes, making errands a breeze.

The North York Region is also home to a number of large outlet and wholesale malls and stores, meaning a great deal of the city’s best deals and access to shopping is right in your backyard! And with so many schools, and attractions nearby, the North York area is on the rise, catching attention from hungry investors. 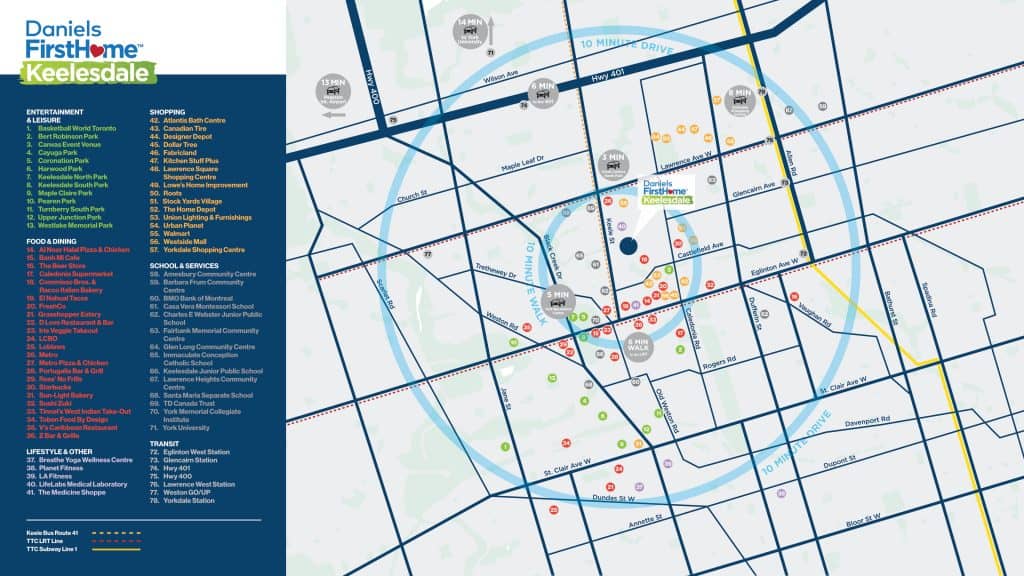 Daniels FirstHome Keelesdale will be a charming mix of townhomes and condominiums. Seven mid-rise buildings reaching eight storeys, plus nine three-storey townhome blocks. Overall, 731 new homes will be added to the area, a block of land that was once the Humber River Hospital. 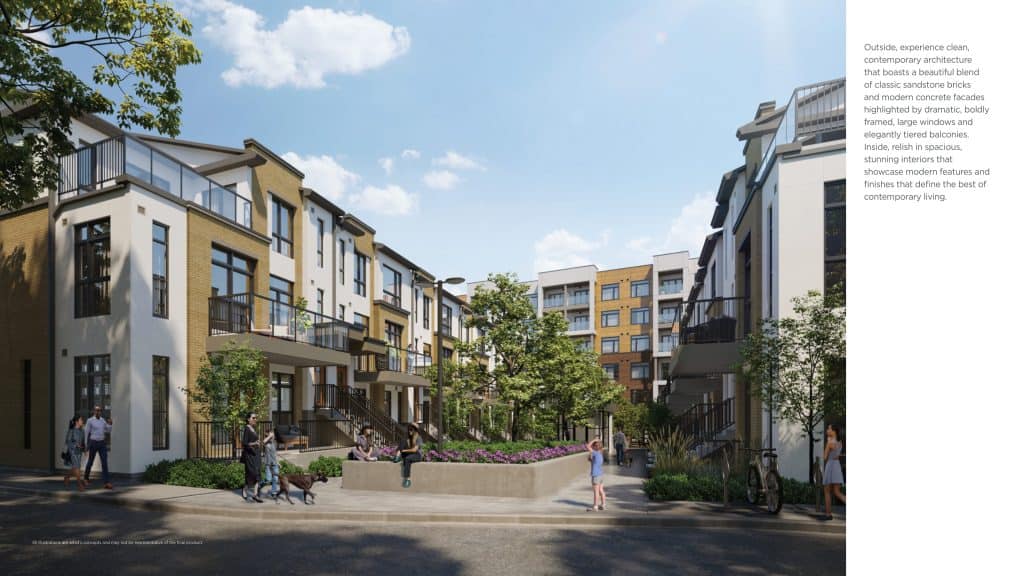 The international architecture firm Graziani + Corazza has been hired to design the exteriors. Current renders depict rectangular, modern lines of white, with brick accent walls. Gorgeous terraces and patios jut out onto green shared spaces, with canopies of gorgeous tress. Meeting places, outdoor parks and social hubs will all be landscaped by the highly-respected Ferris + Associates firm, which are looking to design the community with a nod to the regions distinct ravine lands.

Underground, a parking garage will house a total of 760 parking spots, most of which will be for residents, but there will be space for guests as well.

Currently, a full list of in-suite finishings has not been released, nor has a list of shared amenities. These lists are expected soon, and the best way to keep up-to-date, is by registering with MyCondoPro, to receive updates as soon as they become available! 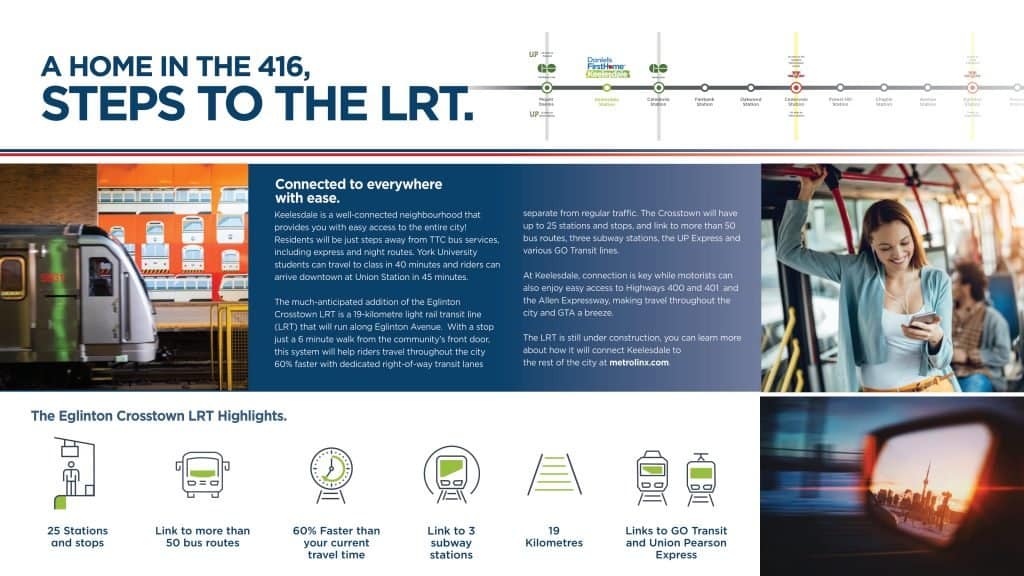 Keelesdale is in a convenient part of Toronto. Residents will be able to reach the Eglinton Crosstown LRT quite easily, with a station, Keelesdale, just a ten minute walk from the community. With an expected completion of 2022, the Eglinton Crosstown will bring a new level of transit infrastructure to the entire York region. Suddenly, connections to the main TTC Subway lines will be vastly more simple, making commutes much easier, not to mention easy travel from the west of the city all the way to the eastern neighbourhoods like Scarborough.

In the meantime, the closest TTC station is Glencairn, and can be accessed with a short drive, or connecting bus route. Head south to Union Station. From here, travellers, commuters and explorers alike have seemingly unlimited options. The UP Express Train connects Union to Lester B. Pearson International Airport in Mississauga, the GO Transit infrastructure runs commuter rail lines across the entire GTA and beyond, and VIA Rail provides inter-city transit along the Quebec-Windsor Corridor, the most populous region in all of Canada.

Or, head North to Yorkdale GO station, making travel across the GTA seamless and easy. Students will be glad to know that commutes into York University will only take 40 minutes, making this an excellent location for investment.

Further, drivers will find being so close to the Allen Expressway a convenient way to travel across, or even outside of the city. Connections to the Highway 400, and 401 are short work, and skip a great deal of the downtown traffic.

Founded with a strong sense of social ethics, Daniels has been instrumental in developing rental housing in Toronto that offers incentives and structure to assist people in eventually becoming homeowners. Partly due to this social service, they have been trusted by Toronto Community Housing to play a major role in the revitalization of the Regent Park area, and the results so far have been nothing short of spectacular – an impressive diversity of homes and demographics has brought about within the area, and it only seems to keep growing!

The Daniels Corporation is comparatively young, but still has over 34 years of experience in the industry. Founded by John H. Daniels, the Daniels Corporation as built over 27,000 homes throughout the GTA. With experience in development of planned communities, rental apartments, retail and commercial spaces, they might be one of the most qualified groups to develop a project of this scope and variety.

Dedicated to elevating the communities they build, The Daniels Corporation is famous for it’s incentive programs. Through this program, renters in their various housing developments are assisted towards homeownership. Essentially this program works like this: A portion of a tenant’s monthly rent is directed to a down payment toward the purchase of a new Daniels Corporation home. This creates a simple path for renters to build equity while still renting.

For many university students, communities like Keelesdale will make for extremely attractive properties. Commutes to school, especially York University, will be convenient, and so a great number of students are expected to be looking for apartments in the area. Such a high volume of interest makes for a good investment opportunity.

40% of the neighbourhood is of working age, between 25 and 54 and the average income of this region is $60K-$80K, and the neighbourhood is on the rise. Between 2011 and 2016, the area increased in population to 14,804, which was an increase of 0.8%. The rise is only expected to continue now that infrastructure programs in the area are completing and begin to settle into peoples commutes and lives. 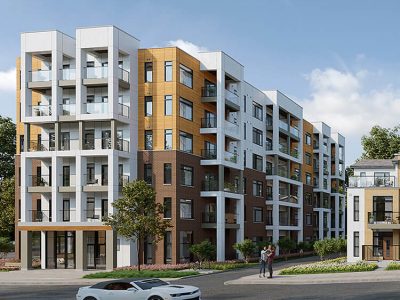 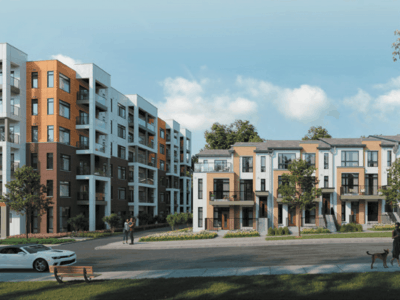 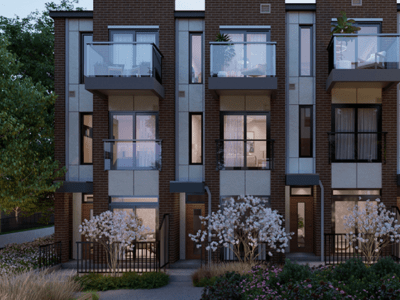 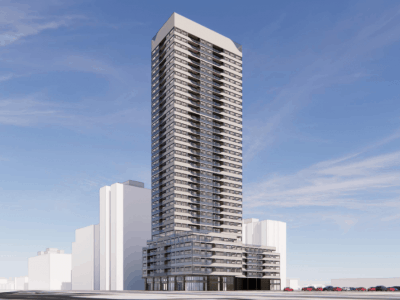 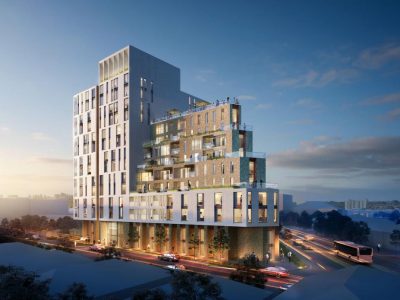